Dublin on our 5th Day

Today we finally got the opportunity to wake up after 7 AM. We wanted to see the Open Market on Temple Bar Area, so that meant to go across the Liffey on the South Side. 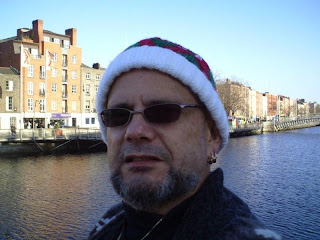 We had to go through the Temple Bar Area to find the Farmer's Market that meets on Saturday. The area is bounded by the Liffey to the north, Dame Street to the south, Westmoreland Street to the east and Fishamble Street to the west. It probably got its name from the Temple family, who lived in the area in the 17th century. Sir William Temple, provost of Trinity College Dublin in 1609, had his house and gardens in the area. Alternatively, it could have been named in imitation of the Temple Bar in London. However it got its name, the earliest historical reference to the name Temple Bar is on a 1673 map. 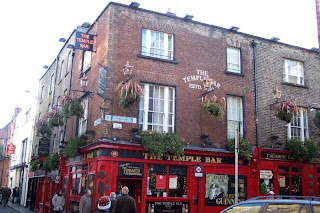 These are very touristic Bars and Pubs that you will have to call tourist magnets( or traps) and they are very pricey. It is a very busy area of Dublin. I was glad we were away from it. 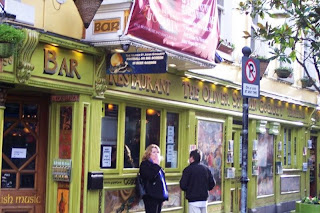 This was a Book Market going on with plenty of things to purchase, but we were not looking for books we were looking for the farmer's Market. 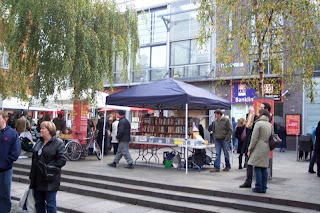 Temple Bar Food Market / Organic Farmers' Market
Every Saturday, year-round, from 9am until 5pm, there's the Temple Bar Food Market in Meeting House Square. Over the past four years, the Market has been going from strength to strength and now boasts roughly thirty regular stalls. There are handmade chocolates from Chez Emily, there's Cakes & Buns from Claudia's. Corleggy Cheeses have another stall, as do Sheridans Cheesemongers, so if you're into your stinky dairy delights, you'll do well here. You can chow down on some sweet pastries, along with many other dishes like their lovely quiches from the Gallic Kitchen. There's the ubiquitous crepe stall, there's fish, vegetables, cheese. Going Bananas make fresh juice from fruit & vegetables. Frank Hederman's Smoked Fish is another one to sample. All your organic vegetable needs can be supplied by the McNally Family Farm. At other stalls, there's sushi, there's jam, there's waffles, there's freshly baked bread and tapas both Spanish and Mexican-style. So it's always a nice stop-off on a lazy Saturday and one of the best things about Temple Bar. 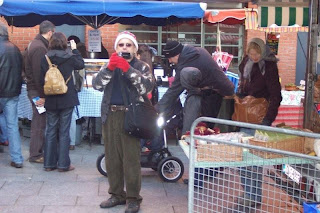 There was even Daddy knitting with his child. A man Knitting in Public. This market is not a bad market, but it was very cold that day. We had Lunch here some kind of Giant Potato-Cheese thing that we split in two lol! 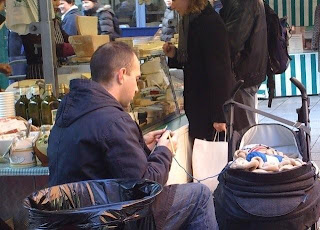 We got some fruits, chocolates, cheese and we were thinking about getting something to drink like a coffee or hot cider, but there was no place to sit. It is a great market and you can find a lot of stuff, great hand made soaps as well. It is not a very big place, so we decided we had enough and headed toward our final destination which was Trinity College where the Book of Kells is. 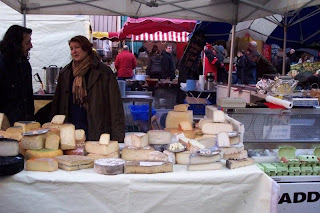 Wait a minute we found a coffee shop where we could get some hot coffee and get warmed up, sit down. After sitting down for a while the police went in, so we knew it must be a good place to get coffee. 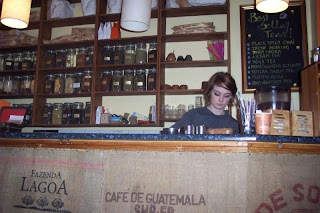 On our way to Trinity College we went through Merrion Square. Merrion Square (Cearnóg Mhuirfean in Irish) is situated on the south side of Dublin city centre and is considered one of the city's finest Georgian squares. The square was laid out after 1762 and was largely complete by the beginning of the 19th century. 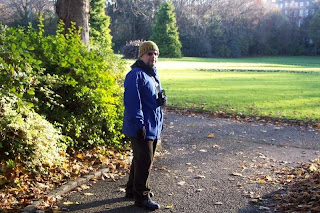 Several notable buildings face on to the square, including Leinster House (seat of the Oireachtas), the Natural History building of the National Museum of Ireland, the National Maternity Hospital and the National Gallery of Ireland. The Irish Red Cross, the Central Catholic Library, the Irish Traditional Music Archive and the Irish Georgian Society have their headquarters on the square. 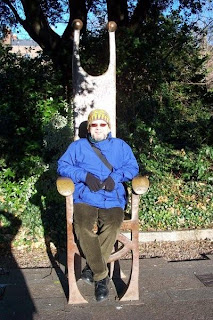 This is a national war memorial which was erected in november to mark the many soldiers that past away while in service for the country over the many past years. Its of triangle design with an eternal flame in the center of the monument.also inside the memorial are 4 bronce life size soldiers with there heads bowed . It is very impressive to the soul! 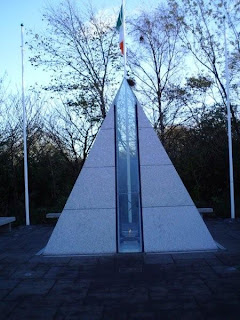 This is a little video so that you can see what the square looks like, it is a very nice place for meditaiton and for relaxing.

Trinity is located in the centre of Dublin, Ireland, on College Green opposite the former Irish Houses of Parliament (now a branch of the Bank of Ireland). The campus occupies 190,000 m2 (47 acres), with many buildings, both old and new, ranged around large courts (known as "squares") and two playing fields. The Library of Trinity College is a copyright library for Ireland and the United Kingdom, containing over 4.5 million books and significant quantities of maps, manuscripts and music. 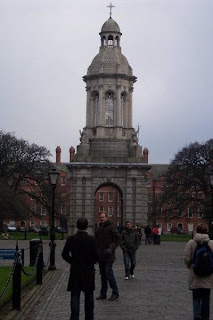 The Book of Kells (Irish: Leabhar Cheanannais) (Dublin, Trinity College Library, MS A. I. (58), sometimes known as the Book of Columba) is an illuminated manuscript in Latin, containing the four Gospels of the New Testament together with various prefatory texts and tables. It was transcribed by Celtic monks ca. 800. The text of the Gospels is largely drawn from the Vulgate, although it also includes several passages drawn from the earlier versions of the Bible known as the Vetus Latina. It is a masterwork of Western calligraphy and represents the pinnacle of Insular illumination. It is also widely regarded as Ireland's finest national treasure. 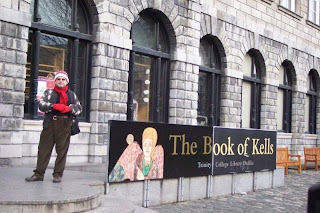 After we saw the Book of Kells Exhibition, we weet back toward Temple bar area, but were able to stop at the Powercourts Townhouse Centre Located in a beautiful Georgian building, the Townhouse is a treasure trove of designer fashion and jewelry. The Powerscourt Townhouse Centre is at 59 South William Street, Dublin 2. This is where we went to the This is Knit Store where we met Jacqui the owner which I knew through Ravelry. 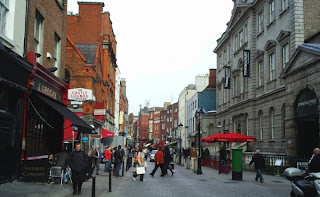 This is Knit is on the First Floor and it is a small store with a lot of yarn, I was happy to see that they opened a new store in Dublin instead of having to go to Blackrock which would have been a bit away, but accessible through DART (Dublin Rapid Area Transit) 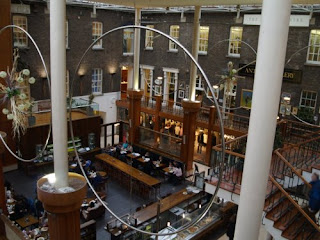 Actually from here we decided to go to the Guiness Factory and this was a blast, we had a complimentary Pint. There was a restaurant Lounge at the top that a young crowd was enjoying a lot. If I was 30 years younger it would have been a fun place to be. 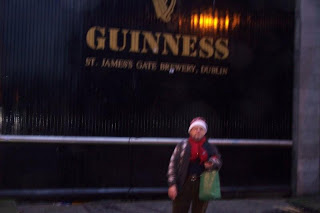 These horse drawn carriages were outside just in case you needed a taxi after all that beer. They were a very nice touch to this place. 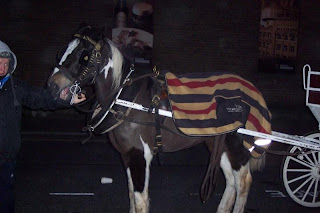 After we visited the Guiness Factory it was almost time for eating dinner and we went to Beshoff for Fish and Chips, we sat on the second floor. 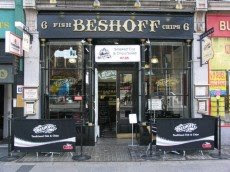 The Beshoff name has been synonymous with quality fish for generations. Grandfather Ivan Beshoff came to Ireland from Russia in 1913 and lived to 104 years. His father lived to 108 and his grandfather to 115 – enough said about the goodness of fish. The Beshoff concept is in sharp contrast with other Fish Restaurants. We offer fresh natural products in old world surroundings – we emphasize the healthy aspect of our food. We strive to achieve a look that evokes an Edwardian oyster bar. This Restaurant is located on 6 . Upper O'Connell street Dublin 1. It is time to go to our Hotel in the LUAS and stop by the convenience store to get some milk, a sandwich and some fruit for the morning.
*
Dublin and for all that matters, Ireland in general is a place to not be in a hurry, you never know when you going to see something that looks like and old wall which actually is 1,000 years old and you would have missed it if you were in a hurry. Tomorrow we take a different tour as our trip is winding down and we are still full of ideas of where to go. Thanks for stopping by.
- December 13, 2008

Wow !! I just finished reading all 5 days of your vacation, what a wonderful time you must have had !
I have lots of questions, but the one that I'm wondering about most..... what kind of yarn did you get ?

There is another day in the making which is actually our last day, The yarn from the Woollen MIlls was Aran Style I will be posting pictures later, the one from the This is Knit was Manos and KIlcarra Tweed. Ho HO HO!