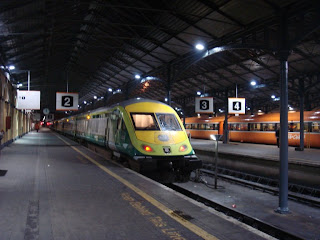 On the 4th day we got up and went to the Heuston Train Station at 6:40 AM and we met the Bright Yellow Jacket People, lol! Those were the ones from the tour. There was a line forming and we promptly were on our way to the reserved seats on this train. The Irish Railways are beautiful extra clean trains with great bathrooms and snack service. There is a Breakfast Car , but we have had breakfast in our room already and brought some snacks for the road. It is very dark, the sun won't come up for another 2 hours. It was exciting to ride a train and get to see some of the Irish Countryside. These train are commuter trains as well, people were coming in and out in the few stops we made. 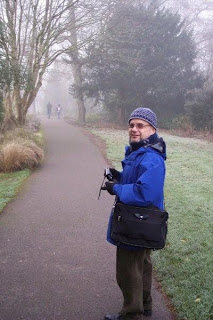 We got to Blarney under a bit of fog and it was very cold, we drove through Cork I believe and ended up by the Woollen Mills where we will be coming back to greet our tour guide Marie and the other people from the tour. We booked this tour through Expedia. If you wondered how cold it was watch the video and you will see the frost on the ground. 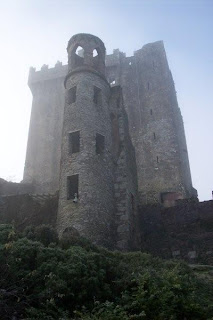 At the top of this Castle is where you go and kiss the Blarney Stone. The Blarney Stone is a block of bluestone built into the battlements of Blarney Castle, Blarney about 8 km from Cork, Ireland. According to legend, kissing the stone endows the kisser with the gift of gab (great eloquence or skill at flattery). The stone was set into a tower of the castle in 1446. The castle is a popular tourist site in Ireland, attracting visitors from all over the world to kiss the Stone and tour the castle and its gardens.
*
Going to the top of the Castle is claustrophobic as you go up this spiral very tight stone staircase. If you are a portly person , meaning too heavy you will not be able to make it through here. So here I am Kissing the Stone. The fellows that help you are very nice guys. When I kissed the stone I felt touched by Magic. I was in the enchanted Forest doing something I never thought I would do. Miles O' Brien here it goes to the Silver Tongue after kissing the stone! Ireland holds a special place in my heart, I guess is from a prior lifetime as this Island just bewitched me with its wonder and green rolling hills. I understand Island People being from Puerto Rico, people that live in an Island tend to be very different, I understood! 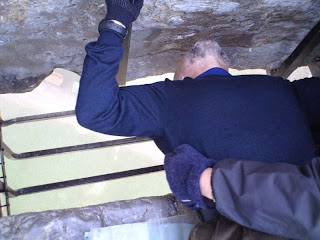 We could have gone through the gardens, but it was so cold and foggy, I just did not want to spend more time there that I had too. We decided to head toward the Restaurant at the Mills and had some Irish Stew for Lunch then we went to do some shopping before we left. The Woolen Mills is a great place to buy anything Irish made that is wool, sweaters to die for, what a lot of beautiful craftsmanship and lots of good sales. 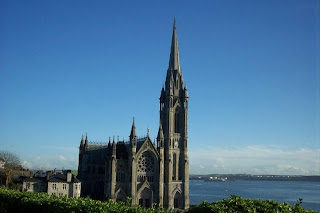 It was not long before we got back into the Van and drove through the town of Cork toward Cobh or Queenstown as it was known when it was under the Brutal British Rule. Here you see the Saint Colman Cathedral.

St. Colman’s Cathedral is a Roman Catholic Cathedral located in Cobh, Ireland. It is the cathedral church of the Diocese of Cloyne.

The Cathedral of Saint Colman is a large, elaborately detailed neo-Gothic building. It is prominently sited overlooking Cork harbour and visible for quite a distance. Local people are generally very proud of it and tourists often climb the steep hill to admire and photograph it. We were able to take a picture from the Van lol! The videos are from the Inside and from the Outside of the Cathedral. I felt honored to be there.
*

Cobh (pronounced /koːv/ "cove"; Irish: An Cóbh) is a sheltered seaport town on the south coast of County Cork, Ireland.

The locality, which had had several different Irish-language names, was first referred to as Cove ("The Cove of Cork") in 1750. It was renamed Queenstown in 1849 to commemorate a visit by Queen Victoria and so remained until the name Cobh (closer to the Irish spelling) was restored in 1922 with the foundation of the Irish Free State.

Cobh is located on the south shore of the Great Island in Cork Harbour, (reputed to be the second largest natural harbour in the world), on south-facing slopes overlooking the entrance to the harbour. Facing the town of Cobh are Spike Island and Haulbowline Island. On a high point in the town stands the Cobh Cathedral, St. Colman's, seat of the diocese of Cloyne.

This picture below is supposed to be the Angel of Death! 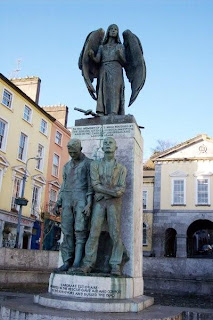 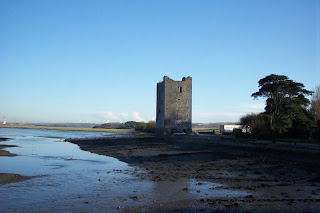 Cobh was the last port for the Titanic, there is a memorial and a lot of historical data. This is a must see if you come to Ireland. 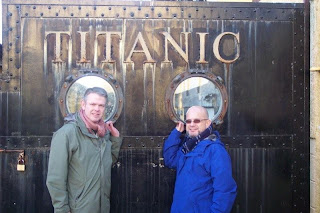 The Queenstown Story is sad, people dieing of starvation, people migrating to America, families divided, people dieing from a famine how could that be allowed to happen. The Irish-American was born. There is a lot of story to tell, these people were very brave and I take my hats off for them. 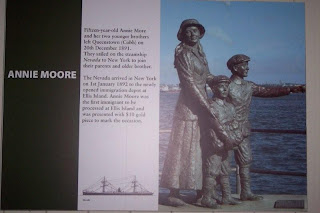 It was a long day and the train was a bit late getting back to Dublin, so we went and got a Sandwich at our favorite convenience store close to the hotel and had dinner. Saturday and Sunday will be two fun days with Our Dublin 2 Day Pass. I hope you liked the journey, I want to go back! In the meantime that night we went back to Dublin. Thanks for stopping by! 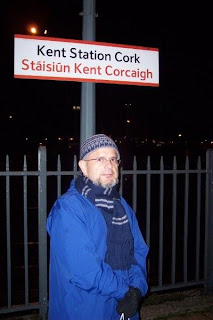 Wow! I would LOVE to see Ireland! This is an excellent vacation, Andy!