The day started a bit early, not really! We had breakfast Buffet at the Hotel and that was a really big Brunch. We also took some fruit with us and water as always. WE discussed during breakfast that on Sunday the Two Museums that we were interested in seeing were opened from 2 PM till 5 PM so we had to make a choice. I followed the Choice from Kemberlee and we went to the Archeology Musueum 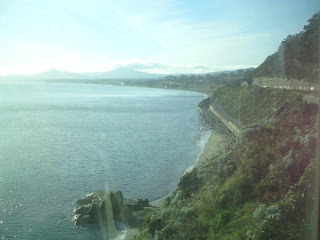 Today we had a short day in the matter of things we could do, yet we followed the advise of a friend Kemberlee from http://www.all-ireland.com/ . She suggested that we take the DART. The DART (Dublin Area Rapid Transit) is the rail line running along the coast of Dublin, from Malahide and Howth southwards as far as Greystones, Co Wicklow. The DART system is administered by the national rail operator, Iarnród Éireann (Irish Rail). You can connect to the regular train service for communities north of Dublin, right up to Belfast. The DART is most convenient if you live in or near the coastal areas. We bought an All Day Ticket which allowed us to have in and out priviledges all day. 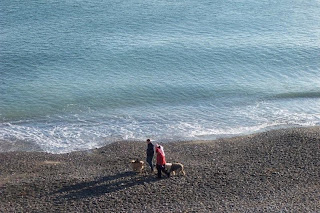 The DART goes by the Coast and it has spectacular views of Dublin Bay from a different perspective. 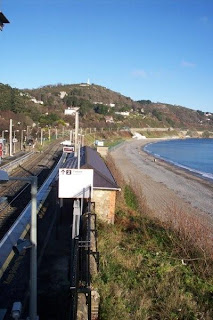 Killiney (Irish: Cill Iníon Léinín, meaning Church of the Daughters of Léinín) is a townland in south County Dublin, Ireland on the outskirts of Dublin city within the administrative area of Dún Laoghaire-Rathdown County. The area is by the coast, south of neighbouring Dalkey, and north to Shankill area in the most southern outskirt of Dublin. It features a village centre and a range of surrounding housing developments. From what I heard this town - village is considered to be like the Beverly Hills of Ireland. We stopped and took a bit of a walk around. Nice houses and nice views!
So it is time to go back to Dublin and head toward The National Museum of Ireland (Irish: Ard-Mhúsaem na hÉireann) which is the national museum in Ireland. It has three centres in Dublin and one in County Mayo, with a strong emphasis on Irish art, culture and natural history.The Archaeology and History section on Kildare Street has displays on prehistoric Ireland, including early work in gold, church treasures, the Viking and medieval periods, and more modern times. There are special displays of items from Egypt, Cyprus and the Roman world, and special exhibitions are regularly mounted. 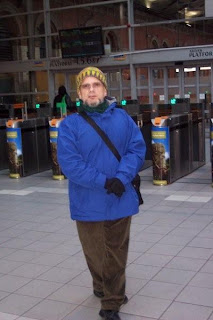 No pictures were allowed inside, but the experience was worth it. Lots of Artifacts including such pieces as the Ardagh Chalice and the Tara Brooch, as well as the Broighter Hoard and the Derrynaflan Hoard, all famous examples of early medieval metalwork in Ireland, as well as prehistoric ornaments from the Bronze Age in Ireland. Many of these pieces were found in the nineteenth century by peasants or agricultural labourers, when population expansion led to cultivation of land which had not been touched since the middle ages. Indeed, only for the intervention of George Petrie of the Royal Irish Academy, and like minded individuals from the Royal Society of Antiquaries of Ireland, most of the metalwork would have been melted down for the intrinsic value of its materials, as did frequently happen despite their efforts. Contemporary Irish are more tuned to their heritage, as can be seen in the example of the Irish Bog Psalter, which was discovered and reported by an alert machine operator in July 2006. This is a must see in Dublin.
*
This day We ate at the Local Mall on Jervis Street, there is restaurant/cafeteria like dinning area at the bottom of the Mall and it is reasonably priced. We just came out of Tesco, the supermarket and bought some of the Souvenir Cakes we will be bringing with us. Today we have already packed our luggage ready to go to the Airport, but we still have another two days. We are prepared for that by selecting the clothes we will be wearing on our trip back Tomorrow we will be doing the Dublin Hop On and Hop Off, we don't have much to see and we will take it very easy. Thanks for stopping by!
- December 14, 2008

Wow, I love the coastline pics!