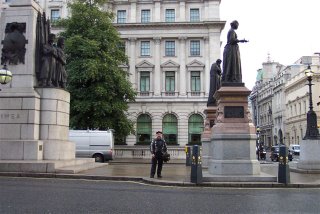 The next day was not a bad day at all. Even if it was a business trip for my partner, we were able to do some sightseeing. Believe it or not, this is a statue to Florence Nightingale, we found this on our way to the Waterloo train station. The day was a little misty, but no heavy rain so far. There were steps and historic buildings along the way. There is not enough space here to tell it all, but a sinapse of what we saw. 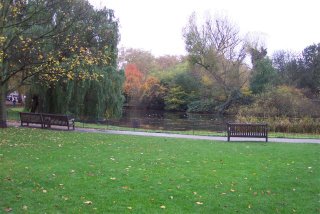 During our walk towards the Train station we saw one of the oldest parks in London, St. James Park. St. James's Park is one of the Royal Parks of London in the City of Westminster, London, just east of Buckingham Palace and west of Whitehall and Downing Street. The St James's area, including St. James's Palace, is just to the north. It is 23 hectares (58 acres) in size.

It is bounded by The Mall to the north, Horse Guards to the east, and Birdcage Walk to the south. The park has a small lake, St James's Park Lake, with two islands, Duck Island (named for the lake's collection of waterfowl) and West Island. A bridge across the lake affords a westward view of Buckingham Palace framed by trees and fountains and a view of the Foreign and Commonwealth Office, similarly framed, to the east. 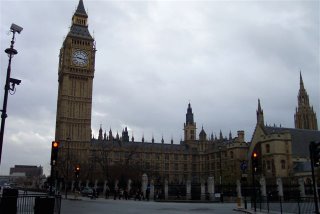 The Park is the easternmost of an almost continuous chain of parks that also comprises (moving westward) Green Park, Hyde Park and Kensington Gardens. The closest tube stations are St. James's Park, Victoria and Westminster.

From the park we were able to see the Parliament Building where Big Ben is housed. Sightseeing while going to work . The parliament is bicameral, with an upper house, the House of Lords, and a lower house, the House of Commons. The House of Lords includes two different types of members: the Lords Spiritual (the senior bishops of the Church of England) and the Lords Temporal (members of the Peerage); its members are not elected by the population at large. The House of Commons is a democratically elected chamber. The two Houses meet in separate chambers in the Palace of Westminster (commonly known as the "Houses of Parliament"), in the City of Westminster in London. By constitutional convention, all government ministers, including the Prime Minister, are members of the House of Commons or House of Lords.

Finally after crossing some bridges, which London has many, we arrived to Waterloo Train Station. London Waterloo is a major railway station and transport interchange complex in London, England. It is located in the London Borough of Lambeth, near to the South Bank. The complex comprises four linked railway stations and a bus station. The whole complex is within Travelcard Zone 1. 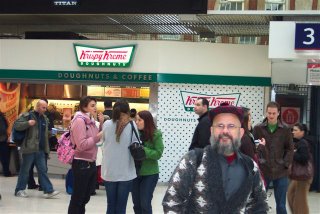 This Station is wonderful and has many shops for your eating and shopping pleasure, even a Krispy Kreme.

We went to the town of West Byfleet where we had lunch with a business associate and after two or three hours of a nice leisure business meeting we took the train back to London.

On our way back we got lost and we saw the four faces of Big Ben. Finally we decided to look for Trafalgar square which we knew was south of our Hotel. Once we found Trfalgar we headed toward Picadilly square and our hotel room. 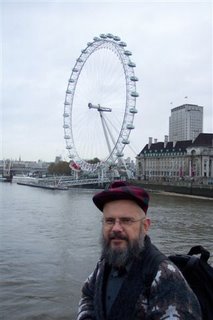 That night with took the train toward the London Eye.
The British Airways London Eye, also known as the Millennium Wheel, opened in 1999 and is the largest observation wheel in the world (a type of Ferris wheel). It stands 135 metres (443 feet) high on the western end of Jubilee Gardens, on the South Bank of the River Thames in Lambeth, London, England, between Westminster and Hungerford Bridges (Coordinates: 51°30′12″N, 00°07′11″W). The wheel is adjacent to London's County Hall, and stands opposite the offices of the Ministry of Defence. The Eye is officially the world's most popular tourist attraction, more popular than the Statue of Liberty, Torre pendente di Pisa and the Eiffel Tower.[1]

The view at night 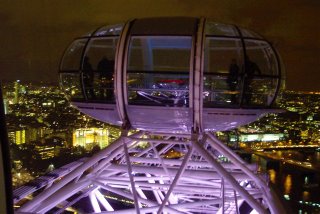 from The London Eye is spectacular and something that everyone who goes to London should experience as you will see the city from a Bird's Eye point of view.

The ride is about 30 minutes , but you will not forget London. It would be nice to take a day trip as well. There was no waiting in line.

After that we went to one of London's many Indian restaurants and had a great meal. I love Indian food and this place was spectacular, right near our hotel. SO far I can tell you that England is a great place to live and that the Britania have a lot to offer to the tourist and to the people that called it home. "God Save the Queen!"

Thanks for stopping by and there will be more to come.

I think it's great that you gave so many links. What a great way for those unfamiliar with the city to explore!