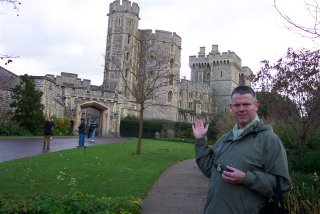 This is the longest day in our trip. It is also the day we get to get up very early. It is not fun to get up this early, but the day is full of exciting adventures. From the hotel we were driven to Victoria Coach Station where our tour will be departing from.

The Bus was big, but no bathrooms on these buses. Talking about bathrooms, in London , theyare properly called toilets, and they all seem to be at the basement level almost everywhere we went.

Here you will find that Michael ushers you toward Windsor Castle. The British Royal Family is not present at this time. 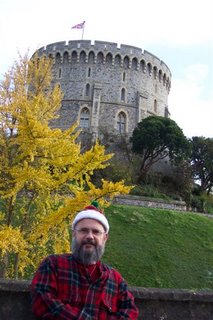 Our guide told us that when the Royal Family is in the Castle there is a special flag that flies and alerts the Tour Guides of their presence.

The palace is magnificent. I have never been in a real palace, but it is how I imagine a palace was. The King had his own room and his own dressing room, he also had his own walking closet, and let me tell you, he must have had a lot of clothes. The furniture was vert elaborate, maybe to much gold color for my liking, but it was the fashion of the times. The were paintings, drawaing, statues, armors, weapons, china, clocks, thrones, carpets, and so on and so on. I do not have space in this blog to express to you all the wonders I saw. I was very fortunate to experience this wonderful place
The day was cold , but a little cloudy and when it was time to leave, it started to rain like crazy. I was glad I brought my umbrella. 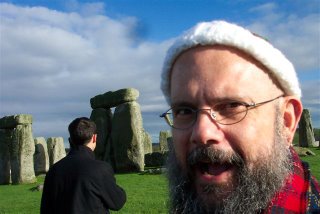 All of us made it back to the Bus and were on our way toward Stonehenge our next stop before Lunch..

Stonehenge is a Neolithic and Bronze Age megalithic monument located near Amesbury in the English county of Wiltshire, about 8 miles (13 km) north of Salisbury. By the time we arrived to Stonhenge the rain had stopped. We had a premium view of the ruins, we walked to about less than 20 meters from stones and close enough to touch one that is there to be touched by everyone. 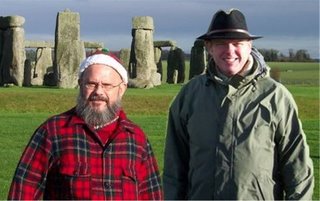 This picture of Mike and I has been fixed , Photoshoped, as we did not get to take our picture together throughtouot our tour. We had a very delightful time. This area was very green and at some areas you see these mounds or tumulus or barrows of earth that are the resting places of some very old bones. A tumulus (plural tumuli or tumuluses) is a mound of earth and stones raised over a grave or graves. Tumuli are also known as barrows, burial mounds or kurgans and can be found throughout much of the world. A tumulus composed largely or entirely of stones is usually referred to as a cairn. A very cool giftshop, too bad they did not have an international Stonehenge DVD, pnly PAL format.

So back into the bus we go, all of us if you don't mind. This place is very far from civilization, you really don't want to be left out there, specially if you have not eaten. So here we go toward the Town of Bath to see the Roman baths. But before we go to the Center of Bath, we will stop at St. George's Inn for a well deserved meal. 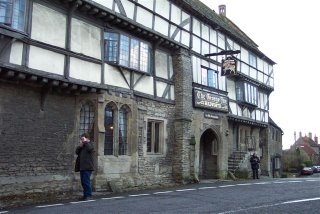 The St. Geroge was my first visit to a village eating establishment and it was very interesting. The food was different, they have vegetables to be shared. They are served on the table . I don't remeber what I ordered for lunch, but I remembered dessert, it was Apple Crumble.

A crumble is a dish of British origin containing stewed fruit topped with a crumbly mixture of fat (usually butter), flour, and sugar. The crumble is baked in an oven until the topping is crisp. It is often served with custard, cream or ice cream as a hearty, warm dessert after a meal. It was delicious, with a cup of coffee. So after we paid for our meal, we all departed toward the tour of the town of Bath.

Here you have a picture of the Avon River and this bridge where they have built shops on top of the bridge. 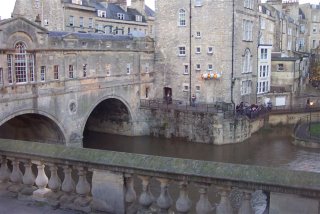 The guide decided to give us a driving through tour in the bus, as we were not sure if it was going to rain or not. At the end it was not raining , but we had more time to window shop or just plain shop. Dozens and Dozens of shops in this city. The smell of Hot chocolate and freshly baked bread also filled the air. There were not very good sales you know!

The Roman Baths are a place of historical interest in the English city of Bath. The city of Bath is a very nice place to go, and I would recommend the tour to everyone.

Roman Baths, that will conclude with a champagne toast.We, the people in my tour, were to gather outside the Baths at 5:55 PM for a private tour of the At 5:55 the doors close to the general public and reopened for our private tour. 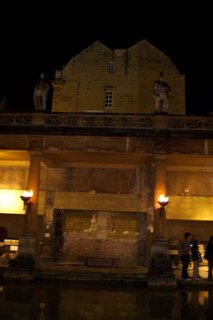 During the private tour we were taken to these ruins, there were plenty of other artifacts that we were shown. We were also shown a model of what this place may have looked like almost 2000 years ago. There were torches lit and at the end of the walking tour of the roman baths we had a champagne toast.

This concluded our night and we were driven toward London, and left at the Gloucester Station where we took the train Home. That night we had dinner in a very nice Indian Restaurant. Thanks for stopping by and return for the last part of this trip which is the last day we spent in London.


The company we used for the tour was http://www.premiumtours.co.uk/ I recommend this company with all my heart.
- December 08, 2006

What a trip! Stonehenge is on my 'life list'! It all sounds really great.

Moving 'down here', it took a while to feel comfortable asking for the 'toilet'. At one party, people laughed and asked me if I was tired when I asked for the 'restroom'! :)

Do I see the sun peaking out in those photos? The UK is beautiful when drenched in sun...