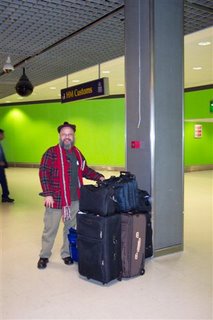 It was a journey to the future as London is 8 hours ahead of us. The trip was not bad at all and United is a great airline to fly. I have never oficially been to Europe as a Tourist at least, and I had no expectations, but to have a good time.

I was received at Inmigration by a wonderful Lady of African descent, with a delightful British Accent. The were a lot of the officers who were smiling as I had my Christmas regalia on.

It brought smiles to their faces. We went ahead to pick our luggage and from the luggage reclaim, we proceeded to take the underground to the Hotel .

It was amazing for me to think that London itself has about 7 to 8 Million People, twice the population of my Native Puerto Rico. To have so many people in one city and have it working so smoothly to the visitors' eyes is an amazing job. 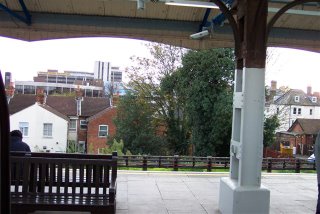 Lots of people were in the underground which comes above ground as well.

There were people from many cultures and many languages spoken. Lots of people using the train from the airport, what a delight. When we left San Francisco, we also used the public system to get to the airport without any problems, but the fact that there is no real space designated for luggage like in London.

The fair was a bit expensive if you thought of the exchange rate, otherwise it was very affordable. The hotel was about 50 steps away from the underground exit to the street. By the way there are not exit signs. The exits are marked "Way Out", very clever, but it is important to look around to see which way is out. 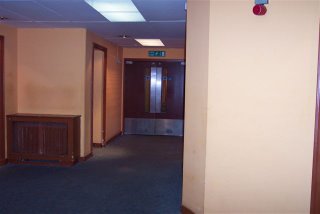 So we arrived to our hotel, The Regent's Palace Hotel. It was not the biggest hotel in London, but just the facts that it was steps away from the underground and we had a full private bathroom with shower was nice enough for me. The rooms are too small for the furniture the have, and they do not take advantage of the room's design. It is not dirty , but it is not sparkling clean. Nevertheless it was a very popular hotel. It was never empty while we were there and people were turned away sometimes.

The Hotel restaurant was Ok, their breakfast was satisfactory and under sanitary conditions. The Bar O Callaghan's Irish Bar was right at the entrance and even though our floor was Non-Smoking floor, you could smell the smoke coming from the Bar, not a very nice smell.

The concierge services were excellent, James was very knowledgeable and corteous. We arrived Thanksgiving day, and that night we will go to Waxy O Connors Pub I don't know if you ever ate at a Pub, but the experience is different. O Connors was like a laberynth of ups and downs walkways. You order at the bar and then you sit down. We had Fish and Chips, and I will tell you, these are the real deal and nothing in the States compares to the Unique Wonderful Taste that my palate encountered. 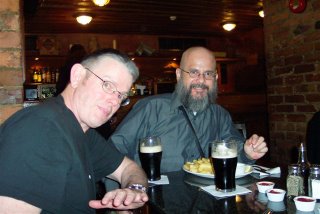 By the way, there was another Irish Pub, which I will not mentioned the name, maybe just once, O'Neill's chain,you will know which one it is. I guess I am not the first one to figure it out as I found a comment by an Irishman here if you click on this link >>> O' Neill's Critique. Noone could have described it better than a Houndsditch. If you have a hat, they will ask you to remove it, just as you are coming from the street, No greeting you but the fact that you will have to take your hat off.. I thought that was rude , specially as we were getting ready to take our hats off as we entered.

Next time I am in London I will be avoiding this unorthodox , not to real Irish Pub. I guess anyone can put an O and an apostrophe and called themselves an Irish Pub. Avoid O'Neills, go to Waxy O'Connors instead. Thanks for stopping by, I will continue later on with part two as I take you through the London Experience..
- November 29, 2006

A little jealous you're in London - I'd so love to be there, way too cool. Hope you take lots of pictures and post them. It's the only way I seem to get a vacation you know...living vicariously through others, ya know. Hehe.

Hope you have a great time, Andy! I'll be looking forward to more updates on your trip. Be good and stay safe ;)

Hey lovey, I've been to London several times and your hotel sounds pretty standard. Hell, you only sleep there right? LOL