In English it is known as bobbin lace. In Puerto Rico this delicate handwork, used to embellish collars and handkerchiefs, bridal veils and baby bonnets, is encaje de bolillos but more commonly known as mundillo—"little world," for the cylinder on which the lace maker weaves her intricate designs.

On September 19, 2003, Rosa Elena Egipciaco of New York City was honored for her mundillo. She is one of sixteen artists to receive National Heritage Fellowships from the National Endowment for the Arts. The fellowships are the country’s highest honor in the folk and traditional arts. The awardees, chosen their artistic excellence, authenticity, and contributions to their field, each receive a one-time award of $20,000.

"We are proud to honor these master artists whose compelling work demonstrates the extraordinary diversity and depth of our nation’s cultural wealth," said Dana Gioia, chairman of the National Endowment for the Arts. "These talented individuals are not only renowned practitioners of their art forms but also teachers and preservers of artistic heritages, passing on their skills and passions to future generations." 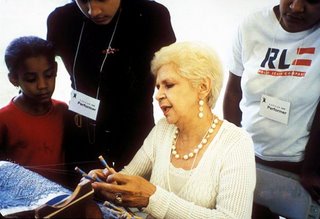 The importance of teaching traditional arts is apparent in the case of Rose Elena Egipciaco, who started learning mundillo at the age of four from her mother, Doña Salud, in Puerto Rico, and has taught and promoted the art in New York since 1986. In Puerto Rico, the towns of Moca, Isabela, and Aguadilla, all in the northwestern part of the island, are famous for mundillo. Moca, Egipciaco’s hometown, is considered la cuna (the cradle) of mundillo. When Egipciaco was a little girl playing house with her friends on the patio, she would design patterns on leaves, using thorns from a bush as needles. As she grew older, she would gather with friends on the balcony of one of their homes to talk, watch the boys pass by, and make mundillo.

When she was president of the Cultural Center in Moca (which she cofounded), Egipciaco traveled throughout the island, giving lectures on mundillo at festivals, universities, and colleges. She is a certified artisan through the Instituto de Cultura Puertorriqueña, the principal arts and cultural agency on the island, and has displayed her work at their festivals. In 1986 she moved to New York City and has taught lacemaking , as well as exhibited and displayed her work at New York University, Columbia University, the American Museum of Natural History, Casita Maria, El Museo del Barrio, Marymount College, Brentwood International Ladies Garment Union, the Office of the Commonwealth of Puerto Rico, and La Casa de la Herencia Cultural Puertorriqueña. She is currently a professor at Boricua College in Brooklyn, and an apprenticeship grant funded by the New York State Council on the Arts Apprenticeship Program enables her to continue teaching privately in Manhattan. 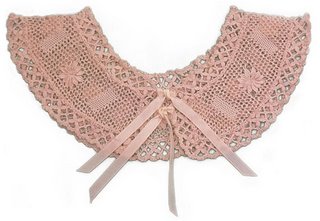 Origins of the Art

There are two types of lace: point, which is made using a needle, and bobbin, or pillow lace. Bobbin lace was first made in the Middle Ages in Flanders (the northern region of Belgium), where it was known as kant ("border" or "edge"), since the original function of lace was to protect the edges of fine materials from fraying, as well as to create a decorative border. The art of making bobbin lace may have reached Spain through Flanders or Italy. Some researchers believe that point lace was introduced to Spain from Italy and from there was brought to Flanders, which in the sixteenth century was one of Spain’s dominions. Bobbin lace, like the art of making it, was then exported to Spain and later to Puerto Rico.

Since making lace by hand is time consuming, it was very expensive and regarded as a luxury item. The Church was the principal consumer for lace for the veils and cloths used during services, as well as for the robes that adorned the statues of saints. During the sixteenth and seventeenth centuries, clothes with lace decoration came into fashion for both men and women of the European nobility. In Spain bobbin lace was made by master lace makers for major commercial markets; lace making was also a cottage industry in places like Mugía in Galicia, Almagro in Castilla, and Arenys de Mar in Catalonia.

In addition to its use as edging and borders on clothing and handkerchiefs and collars for shirts, mundillo is also used to decorate items for special occasions, such as wedding dresses, baptismal gowns, and the cloths used to adorn religious icons. Once it was common for lovers to exchange mundillo lace with romantic inscriptions. 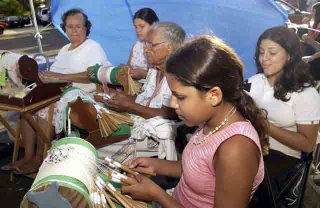 I wanted to share this article with you, Thanks for stopping by.

I saw a demo of this at the Pgh Knitting festival...the stuff is just gorgeous. I would love doing this, but really can't get into ANOTHER hobby right now... lol!!!
the bobbins can be VERY VERY expensive.