We kept going along to the rest of the Island where we went tothe Cemi Museum, from the Taino Indians. A Cemi is a representation of their deities. The museum is small , but it is just a place of history. Here you will see a ceremonial ring that they will use as a belt for some kind of game. Just know that it looks heavy and who knows what kind of game it was, but I bet the loser did not have a good time.

Here is another picture of some artifacts that the Chief carried that denoted power, well the long stick is about 12 to 14 inches long and I will leave it at that. The power of men seems to always be attached to phallic objects no matter what culture is addressed, I guess the chief will have a fast red car these days.

There are many more indian ceremonial parks and artifacts throught out the Island. The indians became part of our blood genetics, but the indians themselves dissappeared due to slavery and western diseases like chickenpox et cetera. 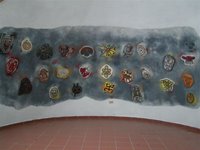 Most puertorricans have in their gene pool the indian blood. Some say the friendliness, humility and spirituality has come to us through our indian genes. A lot of words, names of towns and dishes are a combination of Spanish, African and Taino cultures making puertorrican culture and amalgam of these three cultures. This is an artistic representation of the writting system the indians had. At the lower left is a collection of fragments from bowls and on the right a set of mortars for grinding yucca root and seeds.

Thank you for stopping by and come back later there is still more pictures to share.
- January 17, 2006

I'm so glad you are sharing the pictures along the way! Puerto Rico really is amazing!

I was very sad that I did not get to see the caves when we visited. I am fascinated by bats and wanted to see them come out at dusk!