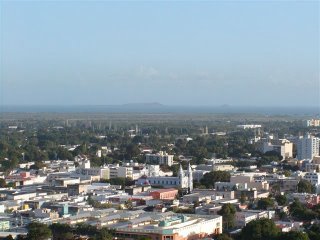 This is the view from one of the Balconies of the Seralles Castle. It is actually a big house, but somehow it got designated a castle. WE arrived almost at closing but were able to get the tour 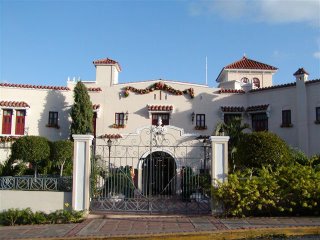 and took some pictures . Here is the entrance of the Castle-House.

The entrance is by the garage which is a coffee and souvenir shop. There is also at this moment a Barbie and Gi-Joe exhibition. WHy is it there it is beyond my comprehension, but it was there.

So that was the trip for that day and afterwards we went up the Turnpike toward home.

The Turnpike is very impressive as it cuts through the Sierra of the Island which divided the Island practically in two. 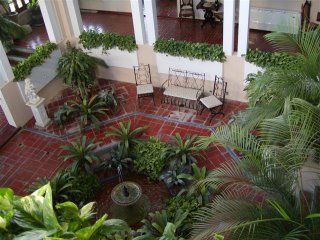 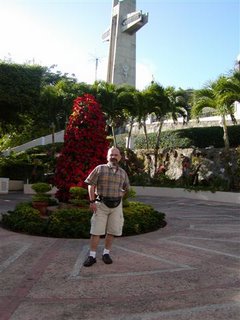 explained what it was, but I did not pay attention to it. Needless to say it has something to do with the christian religion. Puerto Rico is a mostly catholic , but other religions are able to flourish as well. There is after all freedom to worship and part take of any religion.

The picture above, is the indoor patio of the mansion. I thought it was too small, but then again I was not asked LOL. Far from the civilized world, but close enough to touch it. It was a family home. At the begining of the visit you get to watch a movie that talks about the Seralles and their creation of the Rum Industry and their Sugar Cane Haciendas.

My maternal grandfather was the biggest Sugar Cane Plantation owner in the inside of the Island, in the town of Corozal. He also dealt in cattle and had plenty of land at the time of his death. Amazingly he did not manage to take anything with him to the great beyond. The shield of the town has three palms, but they are not coconut palm trees, nor dates, they are corozo nut Palms. Near the top of the Palm Tree there are these huge thorns, monkeys will not climb to the tops as you can imagine it is painful. The thorns are also within the leaves and are as long as six inches and very hard. These palms are sometimes used for decorations on the outside of the areas where monkeys are.

Tomorrow I will continue the travelings through the old wald city of Old San Juan. The pictures are nice as well. Thanks for stopping by.
- January 18, 2006

Those pics are fantastic. Puerto Rico seems to be so beautiful!!!! I guess that's why is in my Must Visit List

I've been enjoying your travelogue!