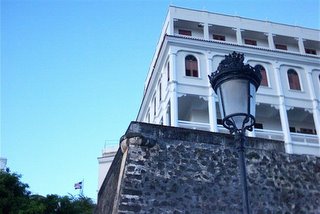 This building atop this city wall that you see here is the Governor's Mansion or "La Fortaleza", The Fortress. San Juan was founded in 1521, the city is one of the most beautiful cities that I have ever seen in the world. It's the city I called home and so many wonderful memories. 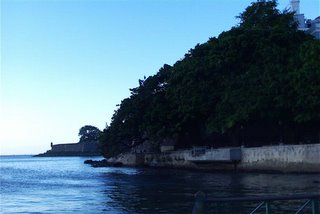 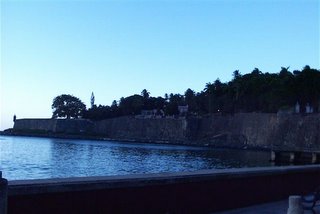 Here as well we can see the wall that surrounds the Island Capital of Puerto Rico.
The whole city is surrounded by this wall and it has strategically placed entrances around the walls. It was almost impossible to invade and it sustained plenty of attacks from foreign pirates sent by governments to grasp the Island of Puerto Rico for it's strategic value, it is at the entrance of the Gulf of Mexico and of course the first big island that has the caribbean Sea at it's reach. 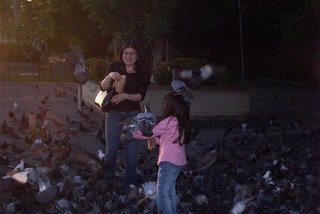 This picture that you see if two generations of my nieces, the young lady jsut graduated from Law School is my niece, and the little lady is my niece's niece or my great niece. She is the most adorable little girl I have met, very smart and lots of fun. She wanted to go to "Pigeon Park", which is the park they are in and feed the pigeons. SOme tourist were grossed out and I explained to them that this has been going on for centuries. The people of Puerto Rico love pigeons, specially if you put them in a pot with potatoes and tomatoe sauce. LOL.
This is the San Juan Door at the Paseo de la Princesa. These doors were fully functional and were the only access to the walled city. It was almost impossible to overtake the city because of the high impenetrable walls and it proved to be one of the hardest places to be invaded and sustained. It worked both ways, you were isolated from the rest of the world if you took the fortress you could be starved to death if you did not plan 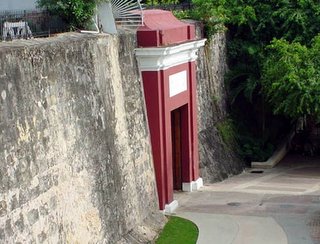