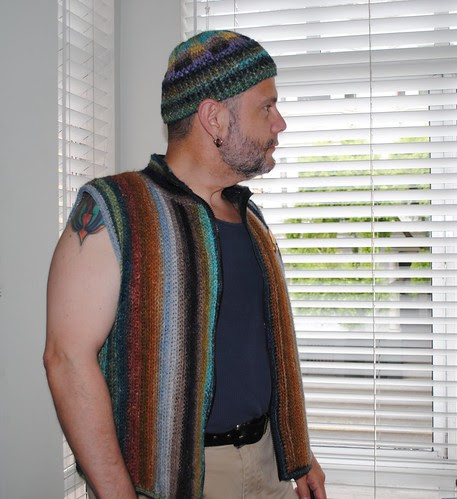 This is the combo of the Noro Silk Garden.  I am very proud of the way it came out as I did not know what would the hat really look like.  The hat was fast crochet project. I would say this is one of my favorite projects and it looks so nice.


If I was going to make the hat again I would take two skeins of the same colorway and work from two directions for this hat.  Nevertheless I had two colorways that were not the same, which kind of assured me that there were not going to be color clashes or repeats.  I like the last idea better, the skeins were very complementary. It took me less than a day to crochet this hat.  I used the Tapestry Crochet Technique to be able to make a nice kind of woven fabric. I went up to a size G or 4.00 mm and I have about 6 to 8 yards left, the hat weighs in at 92 grams and that is with a reversed single crochet edging.  If Noro could keep the vegetable matter off it would have made for a more pleasant crochet experience. 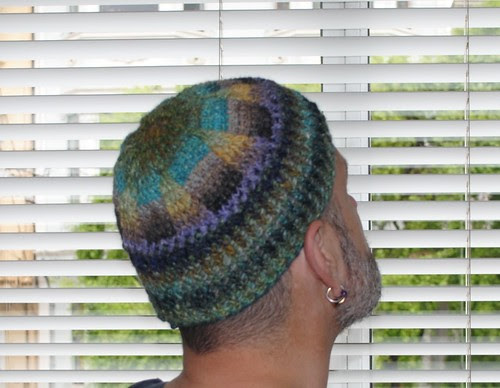 What is with those knots that I found, people this yarn is not cheap, the least I expect is to have a complete skein without a knot.  Well at least the second skein was without knots. Even with the knot I fused the yarn, who wants a knot in their wool hat.As with the previous Wollen Mutsens this hat is Reversible as well, maybe later on I will have pictures of the reverse side.  The pattern is on the Side Bar and if you are on Ravelry look it up, it is an easy fun pattern to get your Tapestry Crochet techniques Started. In the meantime thanks for stopping by!
- July 20, 2010