This is my First Truly reversible hat of my own creation. It is a Crochet Crown with lots of Front Post Stitches among regular single crochet stitches. It is done with The Eye Of Jupiter Colorway that I created and has a very ethereal look in my opinion. Is like the Blast of the Nova. There are sets of Five Front Double Crochet in sets of Two and Three. 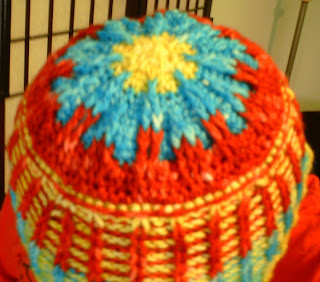 I wanted to make this hat completely reversible and since I have no problems wearing a hat with a Tiny star on my head, I just crochet a Star , five pointed by the way which represents the final five cylons. I guess is all about creativity and how you adjust it to the pattern. Each point in the star has 5 yellow stitches. 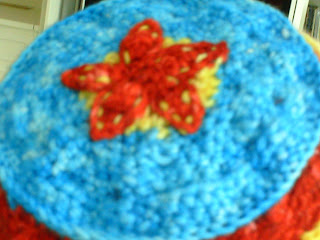 This hat is a very quick knit, it has the same stitches as The Botanic Hat, but it is done from the Crown down instead of from the bottom up. It was not hard to do, but I had to add 16 stitches to the pattern so that it would fit me well. 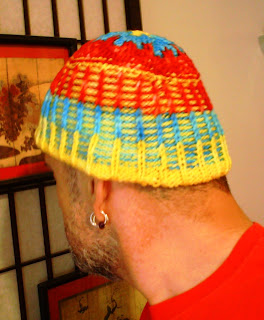 Each Color section has five repetitions of slip stitches. I wanted to use this Botanic Hat Pattern idea, because I found that it was very quick to knit and would give me what I wanted, if I watch what I was doing lol! 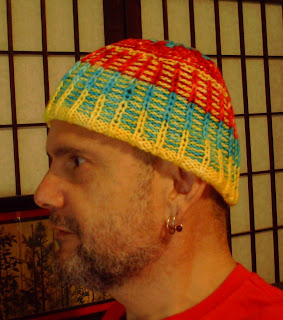 This is another view of the right side or the wrong side, but since it is reversible who cares right? The wrong side has no meaning on these hats. You can make a hat like this in less than two days if you have the time of course. 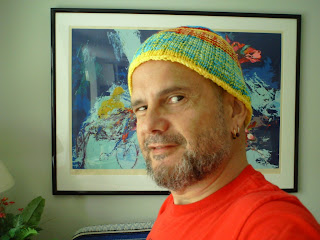 So here you have the little star on the back of the hat which is adorable in my opinion and calls to the little kid in me. It looks like a Starfish . Well now that I have found my new joy in double pointed needles I am ready to tackle my next project. My next project is the XOXOXO Hat and mittens. Thanks for stopping by! 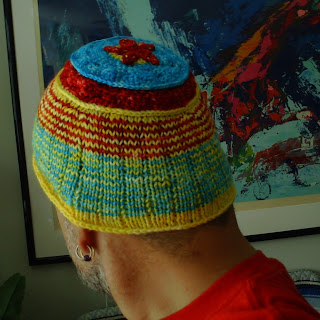