SFO to DUB day One

In this economic challenging times we were able to take a Trip by tightening our belts and saving money. It takes a Taurus with lots of determination to save money, but I have been aware of the economic downturn for a couple of months now as I look into the Heavens and see the Astrological Dancing in the skies. So we embark today a week ago to Ireland via London. We travelled through United Economy Plus, and it was a very comfortable flight as it has been on years before. I was able to knit this hat by the time we arrived to London and boy did I use it one day. This hat is double stranded and it is in short rows. It resembles The Tychus, but it is knit and purl, not garter stitch and I use wraps, but it is based on this pattern. 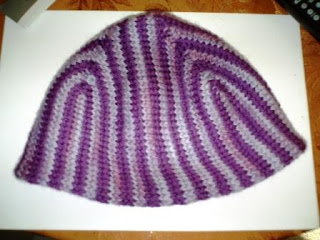 We had a lay-over in London of 6 hours, which by the way, I have found to be fantastic to get your body in sync with the new time zones. We arrived at dawn. We had to go to England's Immigration to the EU for non EU citizens, what a slow line, very slow, did I say slow?
*
After what seem to be an eternity in line, because they did not have enough agents and the agents that were there were on training, We decided to have Breakfast at the Tin Goose, great restaurant by the way.
*
The needles I bring on the plane are wooden needles, nothing circular and no metal. The Crochet hooks are a combo, some metal, some wood and some plastic. I never bring anything that is of great value, just in case someone decides I can not take it through!
*
I will be blogging each day as if it was in real time for last week, taking you through the steps we had to go through until we returned to our Homeland, USA! There will be some cute short You Tube videos to share as well. Thanks for stopping by.
- December 09, 2008

Hey Andy, I think your creations are amazing, i am a new knitter (is that even a word) and would and know knit and purl, but nothing else.
would you please provide the pattern for this hat?

Oh my goodness, I'm so excited to hear about your trip! I'll stay tuned!

Gorgeous hat. I love the design. I wish I could crochet sometihng like that. I may just have to try!

That is quite an interesting design on the hat!!