Ireland the Land of Wonder

The land of green, castles, fairies and leprechauns and the sorts. I hope that as you follow me through my small vacation, that you will be able to see Ireland through my eyes. I have fallen in love with the Island of Ireland and it's people. I love their accent and their spirit, their good Whiskey and their Guinness Beer, the Lamb stew, Phoenix Park and Molly Malone. I had no idea of the reality of these people and their struggle for Independence. A land of thousands of years of history, but The Republic of Ireland is a very young country in itself. I want to salute Ireland and it's people with my blogging about my experience on this enchanted land. I actually felt like I was at home in a totally strange land. The sound of the Irish Language was very comforting. What a great place to visit. There is more to come. 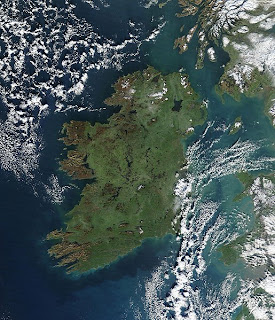 Ireland (pronounced /ˈaɪɚlənd/ (help·info), locally [ˈaɾlənd]; Irish: Éire, Ulster Scots: Airlann) is the third largest island in Europe, and the twentieth-largest island in the world. It lies to the north-west of continental Europe and is surrounded by hundreds of islands and islets. To the east of Ireland, separated by the Irish Sea, is the island of Great Britain. Politically, the state Ireland (described as the Republic of Ireland) covers five-sixths of the island, with Northern Ireland, part of the United Kingdom, covering the remainder in the north-east.
*
The population of the island is slightly under 6 million (2006), with 4,239,848 million in the Republic of Ireland [2] (1.7 million in Greater Dublin)[3] and an estimated almost 1.75 million in Northern Ireland[4] (800,000 in Greater Belfast[5]). This is a significant increase from a modern historical low in the 1960s, but still much lower than the peak population of over 8 million in the early 19th century, prior to the Great Famine.[6].
*
The name Ireland derives from the name of the Celtic goddess Ériu (in modern Irish, Éire) with the addition of the Germanic word land. Most other western European names for Ireland, such as French Irlande, Spanish, Italian, Romanian and Portuguese Irlanda, German Irland, and Dutch Ierland, as well as Russian Ирландия [irlˈanʲdʲijə], derive from the same source.
*
- December 03, 2008

Oh, Andy, that just HAS to be a wonderful experience!!!!! I have tagged you on my blog.