This below is the Northwest Passage Hat, but I frogged it and will restart it sometime later in a different way. I will still use some 3 or four colors, but not in the way I was using them before, maybe it will call for bobbins, but carrying more than two strands of yarn is kind of messy and crazy, lol! 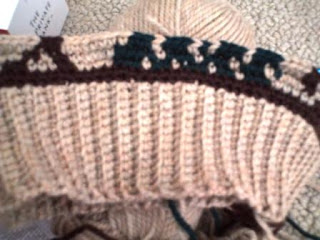 This is one of my Knitting WIP, it is the Taurean Antler Scarf is made with Knit Picks Super Swish wool , the colorway is Copper, lovely color. This is a vey nice pattern and if you want to learn the makings of cables and how they behave, this is a great pattern to do. I am doing cables without a cable needle, which I like a lot as it is one less needle to carry with you lol! 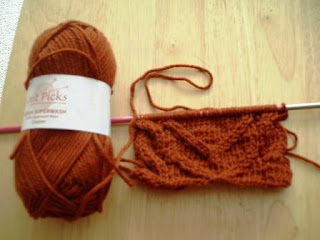 This is the Palermo Sun Tapestry Crochet WIP, but is a picture that can be replaced easily today, I will have a more advanced picture of this cap later on. Right now it lost the ruffle effect and it is waiting to reach the 21 inch mark, it is at 19 for now. I think in a day or two there will be a couple of new rows and very soon there will be a surface sc row. 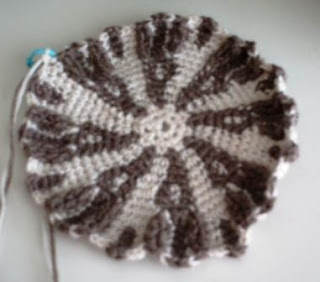 Below you probably recognize the House Colors of the Gryffindors, it is a hat I just started and it is going to be lovely. I am really liking the texture and the shape this hat is taking! 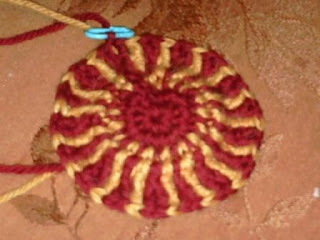 It is almost election day, vote Yes on No and No on Yes, there have been two websites with political ads, one crochet that I got one of the owners upset because I expressed my dissatisfaction about political ads, she thought I was blaming her, I was not. She deleted my post saying it was not appropriate for the forums and I responded that is was not appropriate in the same way those ads were not appropriate, she did not like that. I rather stay away for a while. The other site is a Knitting site. The only fair way of posting political ads is to have both sides posted, otherwise it looks like you are taking sides. Well I will boycott both sites until next week and that way there will be no ads on my face about political stuff and no traffic from me. Go and vote what your heart and mind tells you to vote. Respect people that don't agree with you, but make your vote count. Thanks for stopping by!
- November 03, 2008

I agree with you about politics. I think THAT is personal, and should be left that way. besides, EWE should be president.