Democracy and the Works in Progress Nov 08

This are my Knitting Works In Progress, I do have some Crochet Work In Progress and another sock I need to do lol! I will be going to a Men's Knitting Retreat from the Men Who Knit West Coast Chapter, well is not that formal , but exciting. 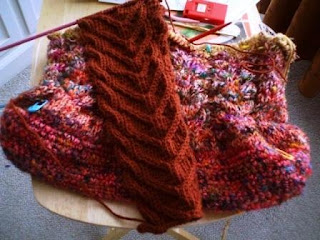 Our Great Nation has taken a Turn, at almost 50 years of Age I have seen so many changes in the world around me maybe milestones. The Berlin wall falling, the dismantling of the Soviet Union, the First Black President in the history of our Great Nation. I look forward to great changes . I believe our American Spirit and the Democracy that our Republic stands for will be reborn around the World. I believe in change and I am so happy the Political Campaign is over.
*
The political campaign was disturbing at times as I went into Crocheting and Knitting groups on the Internet that had google ads. There is no place for Political ads on Crafts sites. I protested on both sites, I even considered closing my accounts, but that will be wrong as well,I just stayed away from the sites until the elections were over, and I will do so again in the future if I see ads that I do not are for. I do understand that the sites do not have control over the ads, but I do have control over what I see, so I can avoid those sites. There is a reason why I don't have ads on my blog, I want to make money like everyone else, but if I can not choose the content I rather not make money that way. I just wanted to express my opinion and I may have not been as delicate as I wanted to be, but I intended no offense. Believe me I have had the opportunity of having my own websites, they are expensive, so you either charge for membership or put ads and make it free, or you just find another way of making money. I will not compromise my personal values for nobody and for no amount of money. Thanks for stopping by!
- November 05, 2008

The sites have no control over what ads Google put out.

I don't understand that ad thing, it looks like there should be some kind of control. I remember looking into Adsence, and if I remember right, they display ads that coinside with your postings,,,,,,, yarn ads if you blog about yarn, ect. I am glad the campaigning is over as well, even though I never heard much about it here. people get downright childish

Beautiful work in progress. I hope you have a wonderful time at the retreat. Some of the ads did get very nasty. Some of the ads on tv here in NC got really bad and I think that is why some people lost.