The Eye of Jupiter is Born

I think that all of us that remember the Galactica of The 70's can say that the New Battlestar Galactica has a different point of view. I found the program at times extremely interesting and sometimes a bit crude. Nevertheless the actors on this Series are fantastic, they Idea of the Human-Cylons is wicked. I like Battlestar Galactica, because it is a program I believe we can relate to. I can see us there in the future of our own planet, but more than that to see the family of man with the 12 Colonies.
*
The Eye of Jupiter was believed to be an artifact contained within The Temple of Five, located on the algae planet, that supposedly will give further clues to the location of Earth. Both the Cylons and the Colonials of the Fleet desire it. The Colonials have the advantage of finding this special temple and beginning the search for the Eye. 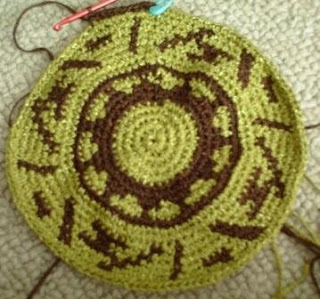 This is actually my first attempt at this hat, but I did not like how it was looking and I frogged it to a point and restarted. This is what happens even when youare following a chart. Thisng look different in a chart than when in Tapestry Crochet on the round. 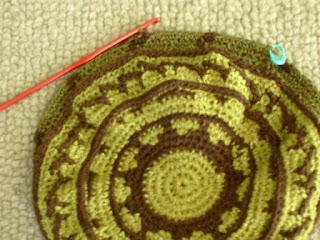 So the Eye of Jupiter Hat is born and it is at a crucial point that I wanted to share with you, I will be making some more embellishments later on . Thanks for stopping by!
- October 26, 2008

It's looking good - I love Battlestar Gallactica and the idea for the pattern is great.

Amazing! I just don't have the patience for tapestry crochet. Either that, or it is the Monsterling that is taking my time and attention.