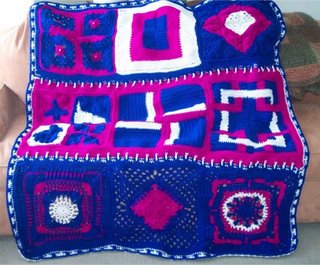 This is the Bajoran Quilt Afghan finished. The upper left Panel talks about the four quadrants of our galaxy. The center panel has a frame within a frame and is made in Tr Crochet stitches in white, surrounded by double crochet in blue at each side. The outer rim of the border is done with popcorn stitches and sc all around.

The Alpha Quadrant would be located between 6 and 9 o'clock positions if the plane of the galaxy were seen as a clock face with the 6 o'clock position bisecting the Earth's Solar system. The Alpha Quadrant serves as the usual setting for the television shows Star Trek: The Original Series, Star Trek: The Next Generation, and Star Trek: Enterprise as well as most of the Star Trek movies. It is home to the United Federation of Planets, the Cardassian Union, the Ferengi Alliance and the Breen Confederacy.

The Beta Quadrant would be located between the 3 and 6 o'clock if the plane of the galaxy were seen as a clock face with the 6 o'clock position bisecting Earth's Solar system.

The reason why the United Federation of Planets and Earth is right on the edge of the Beta Quadrant is to make previous references to quadrant made in the original series, its movies, and early episodes of Star Trek: The Next Generation consistent (prior to this the term "quadrant" was used interchangeably with "sector").

The Beta Quadrant is home to the Klingon Empire, Romulan Star Empire, Gorn Republic, Son'a and Metron Consortium as well as a portion of the Federation, including Vulcan. Parts of the Romulan and Klingon empires spill into the Alpha Quadrant, and thus the Romulans and Klingons are still referred to as Alpha Quadrant

Powers (possibly analogous to the former Soviet Union having been considered a western power, though it was physically located mostly in the east).

The Gamma Quadrant is located between the 9 and 12 o'clock positions if the plane of the galaxy were seen as a clock face with the 6 o'clock position bisecting the Sol system.

In Star Trek the Bajoran wormhole, near the Deep Space Nine space station in the Bajor-B'hava'el system in the Alpha Quadrant, leads there. The Gamma Quadrant is primarily ruled by the Dominion, although large portions remain unexplored.

The Delta Quadrant is the Quadrant of the Milky Way that would be located between 12 and 3 o'clock positions if the plane of the galaxy were seen as a clock face with the 6 o'clock position bisecting the Sol system. Most of the information about the Delta Quadrant comes from the show Star Trek: Voyager. Star Trek races that come from the Delta Quadrant include the Borg (the dominant species in this quadrant), the Kazon, the Vidiian, Talaxians, Ocampans, and the Hirogen. Species 8472 was first encountered in this quadrant, although they are not native to this region or physical dimension.

Curiously, this arrangement results in: 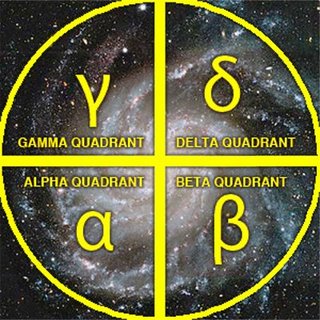 The order of the quadrants is therefore neither clockwise nor counterclockwise..

The Center Panel of the Afghanis the way the ancients thought the planet was, a flat surface. The last Square is the beginning of the Bajoran System or B'hava'el,

The Bajor system (also referred to as the Bajoran system or the B'hava'el system) is a star system some 50 light years from Earth containing 14 planets. It was a key system for the United Federation of Planets and the Dominion during the Dominion War, as it contains the only stable connection to the Gamma Quadrant, the Bajoran wormhole.

The system was briefly occupied by the Dominion in 2373-2374, but was later retaken by the Federation as a result of Operation Return. (DS9: "Emissary", et al.)

Bajor is the largest planet in the system. (DS9: "The Nagus")

The center pattern with it's multiple squares talk about the different paths of the Prophets.

Then the last panel is the depiction of the opening and closing of the wormhole.

A wormhole is a "tunnel" connecting two separate points of space-time. It consists of two "holes" in space-time connected by a conduit outside normal space, through 'subspace'. Since this conduit through subspace is shorter than the distance between the two points in normal space, almost instantaneous travel is possible between the two points. If a wormhole is large enough, and stable enough, a starship (or other traveller) could enter one end and exit the other, thus shortening a journey. A wormhole can also connect two different points in time since the conduit is outside normal space-time, enabling it to return at any place, at any time.

Before knowing where the Harry Kim wormhole ends, Tuvok stated that there is a 75% chance that it doesn't lead to the Alpha Quadrant. We may conclude that wormholes never leave the Milky Way (VOY: "Eye of the Needle").

The Bajoran wormhole is the only stable wormhole currently known to exist in the galaxy. The terminus nearest to the Federation is located in the Denorios Belt in the Bajor system, and crosses some 70,000 light years to the Idran system in the Gamma Quadrant.

The wormhole is also the home of extra-dimensional beings who are worshipped by the Bajorans as the Prophets, and therefore is also sometimes referred to as the Celestial Temple.

Bajoran historical records indicate that the wormhole has most likely been in existence for at least the past 10,000 years. In that period of time, nine Orbs have appeared on or near Bajor, and are revered as active links between the Bajoran people and their gods.

There were several unexplained incidents that are now attributed to the wormhole, although it remained undiscovered until the 24th century. In the 22nd century, Kai Taluno's ship was disabled inside the Denorios Belt for several days, and Taluno reported that "the heavens opened up and nearly swallowed the ship." Also, in 2337, an unknown, unpiloted alien ship appeared in the Belt, with a shapeshifting being on board.

Because the Denorios Belt was generally avoided by all interplanetary traffic, the wormhole remained undiscovered until 2369, shortly after the end of the Cardassian Occupation of Bajor. When Starfleet took over operation of the station, Commander Benjamin Sisko and science officer Jadzia Dax investigated the many reported anomalies in the Belt aboard the USS Rio Grande, and became the official discoverers of the wormhole. Shortly thereafter, starbase Deep Space 9 was relocated to a position near the Bajor terminus of the wormhole. (DS9: "Emissary")

The interior of the wormhole

There is no full understanding of the scientific principles that allow the wormhole to remain stable. Much information, however, has been gained through observation in the past decade. Highly elevated levels of neutrinos are commonly detected prior to the appearance of the wormhole's event horizon, and as a vessel traverses the passage. It is believed that verteron nodes play a large part in keeping the wormhole stable. (DS9: "In the Hands of the Prophets")

Thanks for stopping by and I hope that you can benefit from the Triva of this posting. Peldor Joi and May the Prophets walk with You!!!

Gorgeous afghan. Beautiful work, Andrito. Hang it on the wall.

Thanks, I wish I had the space I would. It is made with the yarn from Scott Hooper, in his memory. I have found a home for it.

It's wonderful Andy! And deep too....