Batting Down The Hatches! 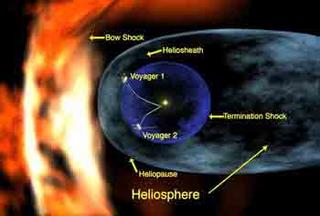 
For some unspoken reason Ion Storms do not get a name, while storms on the surface like huracanes get a name.

In a solar system, the composition of the solar wind is identical to the Sun's corona: 73% ionized hydrogen and 25% ionized helium with the remainder as trace impurities. These components are present as a plasma, consisting of about 95% singly ionized hydrogen, 4% doubly ionized helium, and less than 0.5% other ions (often called minor ions). The storms may take longer it will depend on the stregth of the solar winds.

The Commander has ordered everyone to condition Blue, which in a station is suppose to deal with phenomena like this. Needless there is always danger, a storm is a storm wether ionic or atmospheric. We are all in some kind of battle readiness, but dealing with a storm as well.


Comunications will be down for a day or so, we will have a standard class A beacon on stand by, just in case we have to abandon the station due to hull integrity issues. Dax and I will probably spend a lot of time at Quark's playing Dabo and maybe having some drinks as well.