The Sunken city of Bahk Nar

Today is the 100th anniversary of the discovery of the Sunken City. For a hundred years the city was rummored to have been discovered. I don't understand that, but there you have one mystery solved and less bureaucracy.

We traveled for what seemed to be two weeks on the Defiant. Destination you asked? Bajor 8, where the civilization of Bajor is rumored to have had a start. In this picture you can see the ruins of the city. The steps of one of the temples in what seems to be a sunken city. 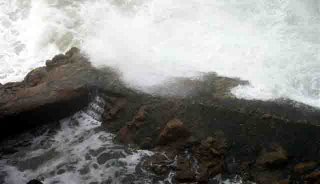 You may be asking yourself how did we discovered this sunken city? Not very complicated. A huge earthquake made the ocean floor rise. The rise was enough to get the attention of some archeologists that were making a survey exploration of the area. Here my friends you have the rising ruins of the sunken city of Bahk Nar. It is no longer a legend it is Real! We still have to do some more studying and see if we can excavate around the ruins. I am actually looking forward to going back to the station and have some peace and quiet.