Double Crochet a perception in talking!

Do you know what a double crochet stitch is? I could not explain it to you, but I could show you what it is and how to make one. When I was in the ARMY I spoke enough English to get me by, but not enough to make jokes. When I made my first joke in English I knew then I was startting to learn the language. There were many people laughing at me, and many people who took the time to teach me. I did not let that bring me down.

Lately I get tired of speaking a foreing language, it becomes more dificult to be able to express the thoughts that come from my head through my brain, to be spontaneously translated into another language through my vocal cords. Nevertheless everyday I engage in the language ritual, some days are better than others. The first thing that happens when you speak a second language is that people have to be very direct with you. I need to give feedback to people and get it as well. Why? you may ask. It is by experience that sometimes people had thought they said something funny and it went over my head, or I was trying to communicate a need and was not heard or was misunderstood.

All in all being a bilingual person is no picnic I will tell you. Sometimes you have both languages running through your head, sometimes one language takes over and the day goes into a different zone. I got this Bajoran script, Bajoran is a made up language from a Science Fiction world, but let it be Klingon for that matter. Can you grasp the idea that there are some terms that can not really be translated? I believe so and it is no fun. I deal with misunderstandings constantly as I look at the facial expressions of the people I talk to. 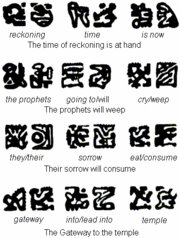 Imagine a language where there were no words for fear, murder, violence, hunger, incest, sin, disease, homelessness, and sadness. I dream of the day that this will come true. As far as us humans go we take our language skills in our vernacular tongue for granted. We take life for granted. We forget that certain terms don't even exist in someone else's language.

A man in the jungle feels rich as he has everything that he needs to survive and even thrive. Some of our ancestors came over this side of the world and thought different. A man that was barefoot, who had a loin cloth, who hunts for food, who does not own land was considered poor. A man that did not believe in our god was considered a savage.

The most frustrating time for me is when I want to say something and I find no word in English or Spanish that comes to my mind to express what I want to say. I get frustrated I freeze and finally you go it, I become mute.
May your travel be without incidents! Peldor Joi!
- November 02, 2005

I know exactly how you feel. I lived in Mexico for six years and although I learned the language well it was exhausting every day! Then I would speak with a sibling on the phone and I couldn't express myself in English anymore. It's bizarre and only those who have experienced it can truly understand what that feels like.

Now that I'm back in the USA I have trouble expressing myself in Spanish again. Argh. LOL

Andres, I can admire anyone who can communicate in another language fluenty. I'm sure that you're better at speaking it than you know. If your speaking English is as good as your writing is, I'm sure it's fine, but I can imagine your frustration at times though. Hang in there. Besides, I'm sure that you have a sexy accent that overides any miscommunication!! :-)

I had no idea that you weren't a native speaker...go figure.

I lived in the Middle East for a year and it was strange living somewhere where English was an anomoly. Trying to communicate with others while there was a trial for me, but I learn a lot of Arabic. So, it was cool.