Time to crochet and A time for fun Oct 05!

Last night I was at the Local LGBT Center, which is one of the community centers in the city of San Francisco. We had language night from all the language groups in the Bay Area including Grupo Sociocultural Hispano , www.gruposh.org, which you can visit by clicking the website link. There you will see what we are all about. Yes I've modeled some of my best hats to this group. The question is; Do you have a hat for every outfit? The answer is simple; I am working on that. LOL

For this particular ocassion I made my great Eggplant salad, which people ate like it was going out of style. 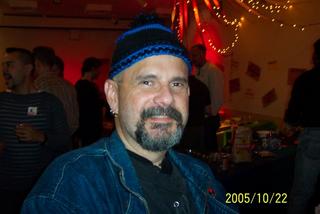 n ready to serve let it be at room temperature for at least an hour. I was upset because some of the juices from the dish fell on my jeans and I had to spot wash them when I got to the party. I was upset with the situation, because the world had to stop, Andy had some spots on his jeans and they needed to go away without a trace. They did. LOL.

I also wore one of my Hats. This hat is actually a reversible hat, one side has a Pom Pom, and it is made 100% in cotton. The neon like blue is egyptian cotton, which I bought to make someone some socks until they fracked with me and ticked me off. Then I decided to use the expensive yarn in various projects , but no socks.
There was even a birthday celebration for my friend Dennis. Here the dynamic trio. Don't we look happy? At least we are very entertained, it was a very successful party, though no entertainment this year. Last year we had a Hawaiian Folkloric dance group. Some local entertainment is always available, some shirts too tight, some jeans too worn, some people had forgotten how the seventies were 30 years ago and their outfits showed. Definitely not in step with nowadays fashions, or maybe they forgot that is was 2005. Not that we care right! The fashion police would had arrested at least two. I was not one of them by the virtues of the Gods. 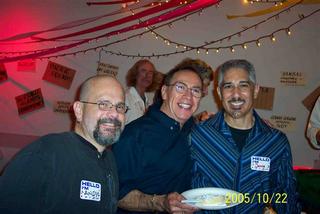 Well enough for me having fun and eating like it was going out of style. We gather once a month and have a great time. For me going to the parties is health dependant, even though I look good, I hardly ever feel good, I am always in pain, and I try my best to smile and be in a good state of mind, but that's my secret. I see no sense in spreading it shhhhhh!!!

So I will have more posts later today or tomorrow, with some works in progress and grattitude to a friend for his help in my website.
Namaste!!!
- October 23, 2005