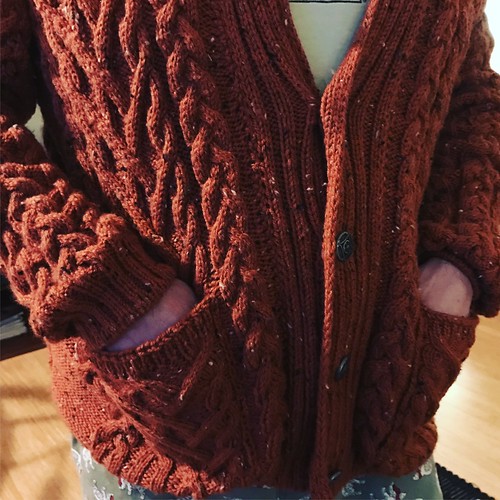 I thought that this was going to be more difficult.  It wasn't, because I thought about it.  I wanted to cut into the fabric and then pick up stitches.  That was a good idea, but not the best idea.  I was afraid that there was going to be a lot of unraveling and I was not going to put myself through that.

You see, the main issue and challenge is where to put the pocket.  Given the fact that I had to select three rows, I had a very hard time trying to decide which 3.  The fact that the ones I wanted were not the best ones got me to decide that it would be better to create another strategy.  I guess the easiest one was to pick part of the pattern in smaller needles and create a swatch that I would be using as the pocket cover.

I picked 36 sts, and 6 of those were kind of as selvedge.  I have to say that I am very proud of myself.  I can make afterthought pockets anytime without fear of failure.  Thanks for stopping by.
- February 11, 2017