I have made three sweaters in my life. I believe sweaters are made to be simple nothing that will make you have a headache for weeks. This is a very simple sweater that I put together a while ago from bits and pieces of Patterns I liked. It is in the Spirit of the Battlestar Galactica Game. SO here goes the explanation of the name of the sweater, kind of lol!Roll The Hard Six Commander William Adama (to Lee Adama, Saul Tigh, Kara Thrace, and Laura Roslin at a mission briefing): “Sometimes, you gotta roll the hard six.” Sharon “Boomer” Valerii: “It’s like Commander Adama says; sometimes you gotta roll the hard six.” 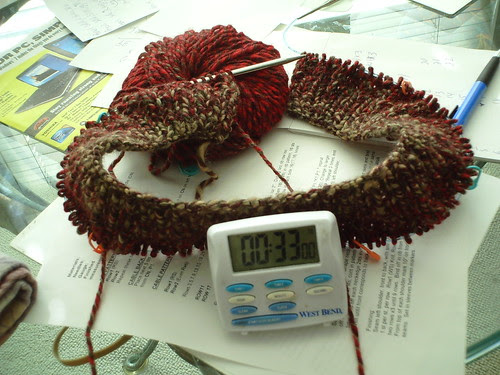 To Roll The Hard six means to achieve something partially through intense skill and partially through luck. Its a high risk / high reward operation, not only do you have to be lucky in achieving the right outcome, but you also have to avoid the wrong ones on the way. It implies a certain level of complexity or layers of contingency in order to come out ahead.
I have always thought that when the pilots turned the vipers completely around backwards to shoot at the Raiders that was considered Rolling a Hard six…but I have not been able to confirm that theory….SO I am making this sweater on the go with bits and pieces from other patterns, because the pattern from Skacell was not very clear about how to make the Brioche Stitch Pattern. Maybe they are I just did not get it. The beauty of this is that I have plenty of freedom to finish this pattern in an almost infinite way of ways. Thanks for stopping by.
- October 27, 2009