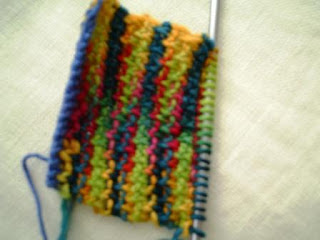 This my friends is the beginning of a new hat with the old yarn. The yarn is not that all just changed hats sort of speak. This is my first Knitted Hat design, it has a very interesting pattern. This hat is done in two pieces, it has a provisional cast on, Kitchener's stitch, straight needles and circular needles. It is a lot of fun and it will have a little limerick to go with it later on lol. This will be my first hat design in knitting. In the meantime here is a limerick:
*
Some men sitting at the barn
taking straw into gold spinning
A scarf a hat we are seeing
the wonders of needles and yarn,
it is the wicked art of knitting
*
The first line of a limerick traditionally introduces a person and a place, with the place appearing at the end of the first line and therefore establishing the rhyme scheme for the second and fifth lines. In early limericks, the last line was often essentially a repeat of the first line, although this is no longer customary.
*
Within the genre, ordinary speech stress is often distorted in the first line, and may be regarded as a feature of the form: "There was a young man from the coast;" "There once was a girl from Detroit…" Legman (xliv) takes this as a convention whereby prosody is violated simultaneously with propriety. Exploitation of geographical names, especially exotic ones, is also common, and has been seen as invoking memories of geography lessons in order to subvert the decorum taught in the schoolroom; Legman finds that the exchange of limericks is almost exclusive to comparatively well-educated males (women figuring in limericks almost exclusively as "villains or victims," according to Legman). The most prized limericks incorporate a kind of twist, which may be revealed in the final line, or may lie in the way the rhymes are often intentionally tortured, or both. Many limericks additionally show some form of internal rhyme, alliteration or assonance, or some element of wordplay.
*
Thanks for stopping by!
- September 03, 2008