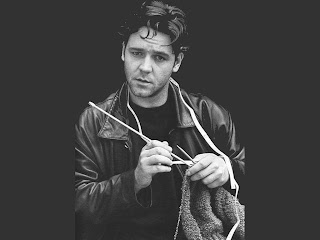 My name is Andres , I usually go by Andy or Crafty Andy. You would be surprised if I told you that I am very shy, yet my desire et interest to meet people and learn about other cultures brought me out of my hometown to this City by the Bay in the search of Freedom and Equality, mind you I was not uncomfortable where I was, but I knew I could be more at ease here by the bay. In my 20 something years of living in San Francisco I learned to love who I AM and to be comfortable no matter where I live or go.
*
I will tell you that in my search for socializing with other people, mainly men, it was nice to know that there was a place of meeting other men who knit even if it was in cyberspace. Women who knit are easy to find, just go to the local yarn store. It is nice to revive old traditions of gathering in a circle and share stories and do something creative together, something not aggressive and positive and not competitive. When I compete I compete with myself, even though we can be competitive at times, it is nice to hang out and just enjoy each other's company, getting to know the person. Here I found MEN WHO KNIT and Women who support them, without judgements about who we are, what we do for a living, wether we are young, old, tall, short, skinny, not so skinny, and so on and so on.
*
So I found myself lucky to find such a great place of Men Who Knit and to consider myself lucky to be here, we have laughed, we have cried, we have gotten angry and the we have made up. We are here together toward a common purpose, to promote Knitting Among Men and those who Identify with us, in a Positive, Non-Competitive, Non-Aggressive Way. Thanks for being part of our community all of you and Darrel for having the vision and foresight. The Fellowship of the Golden Needles is here!
*

By the way I don't know if Russel knits or doesn't, but he is secure enough to be able to take this picture, how can two sticks and some thread make him look like anything else but Himself? Here you have some excerpts in Italics of the 54 Y old South Carolina Man's Posting and I quote

*
"How do I start? It seems funny to me that when I knit in pubic how often I’m misunderstood. I was at a local meeting group ‘Calling all Knitters’ one Saturday, I’m the only man, when a foursome sat at the table next to us. Within minutes I heard the muted talking that suggests that they’re talking about you, you know, voices lowered even lower than they need be, because the acoustics in a Hardees isn’t that good anyway?Raucous laughter followed with an overtly loud, “I just can’t get over it, it looks so funny.” I hoped the “it” was my knitting and not me. I looked over, and made eye contact with the speaker. I nodded my head in greeting."
*
Now do you go to Hardees to eat and drink or do you go to knit, none of my business to start with, but this is in my opinion a bogus story from an insecure straight man which I believe is a closet case or at least very insecure about being a masculine guy and I told him so in my response! How did he know they were talking about him or not, they were sitting beside him, maybe they were talking in a foreign language too? I think the story is made up just to put his opinion across, what an insecure man.
* "The laughter dying down, continued off and on for a few minutes; I kept on knitting, listening more to the ladies talk in our circle about this pattern or that, what charity things were being knitted for whom, and so on. Then I heard from the table again; “you know, you kind of get used to it after a while.” I smiled inwardly, as I’ve noticed time and time again that that is the general pattern of acceptance."
*
I married man intimidated by women taking about him, sounds paranoid and far fetched to me, specially if he was accompanied bu other females. Women are very defensive of their male knit companions, that I have learned.
*
"I’m hoping to find the same thing here. For some time, I’ve looked for a man’s knitting group, one which wasn’t overtly gay. Not because I don’t like gays; but because I don’t care much for the talk that comes naturally out of a gay community. Things like “partner” or wife followed by the pronoun, “he”. or talk about showing off a finished work, a knitted willie warmer, by having one’s better half model it. I can honestly say that of the four local knitting groups I go to, ninety-nine percent women, it’s the kind of talk I’ve never heard, and yet I find it here within minutes of reading blogs."
*
In his first posting he put his foot so far up his bum that the toes were making him stutter. If I join a group of Chinese knitters, maybe I can ask them to not be so overtly Chinese? Or women not to be so effeminate, or maybe some Caucasians not to be so Caucasian? The Gay and the LGBT Community is so diverse and complex, people have no idea, there is no such thing as the stereotypical type, there are many types , many enough that you will need a reference guide lol! How does that sound to you?
*
I don’t know where I’m going with this; but, I guess I’ll discover if I belong here or not, we’ll see. I personally am trying to prove to the world that not all knitters are effeminate. A side effect from the historical transfer of knitting to women and its general abandonment by men. I guess I’m just asking for a little decorum; or not. You see, I do believe that everyone here has the right to freedom of speech; and perhaps I’m the one who doesn’t belong here.
I would like to hear from others on this…. the real subject is “decorum”.
*
Well let me tell you most guys went insane, straight, gay and just the guys, people from all over the world commented. I told him that he looked very effeminate to me . His eyebrows look plucked and I told him so, plucked well formed eyebrows on an older man look effeminate, even on a young guy. Yet I know effeminate men and masculine me, and then there are plain men, and that has nothing to do with being gay or straight for that matter. Why do people have to sexually a craft? A lot of people told him that he could leave at any time or stay and learn something different. So far he has stayed, one thing is for sure the self righteous picture he had of himself is no the same he came with. I think he is a closet case. There are countries were same sex marriages are allowed, what are you the reader and him for that matter do when you go and visit and see two men exchanging marriage vows in a foreign country,like Spain, Canada, And so on ? The likelihood is that he may stay in his little corner of his small world. I will not tolerate bigotry against anyone no matter what. This is the 21 st Century and there is a LGBT Community Worldwide fighting for the right to love and be equal!
*
This is a long post, not as long as I want it, but shorter than expected, please don't judge people for their sexual orientation, gender, age, disability, slim or not so slim, tall, short, for their religion, political affiliation or gender or crafts they do, don't judge a Knitter or Crocheter because of the Yarn they Use, I apologize for the length, Silence = Death. Thanks for stopping by!
- August 23, 2008

I had read this guys post to MWK. Since I do not post on a regular basis (lurker) I opted not to comment on this because they guy is a flake and I would have had to tell him so! I totally agree with you, he looks very effeminate but no one judged him on how he looks, he did not draw any attention in that community until he insulted 90% of it's members.