Men Who Crochet and those who Teach them.
Here is Moi. I am teaching a class to a group of peers that want to learn to crochet. Today we took the basics, of making a chain, slip stitch and single crochet. This hat that I am wearing is made by a friend and member of Crochet Depot, Candy , http://groups.msn.com/crochetdepot Candy, using the pattern from Deneen ,
you can find the pattern Deneens cotton-skull-cap-great-as-chemo-cap. 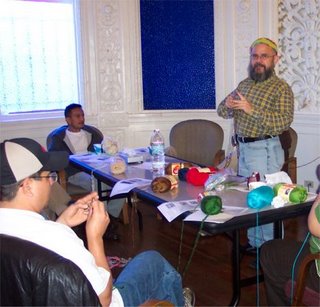 The idea came from the fact that the guys wanted to make hats and scarfs. Today's basics are enough to make scarfs and hats. It was in Spanish and a challenge as I learned to Crochet in English and even though the movements are the same, the names are different. Thanks to Scott and Guillermo for their efforts in making a Crochet In Spanish manuscript that I was able to give copies to all of them. There will be a second class and in the futute there will be a class of Men who Knit. Thanks for stopping by. 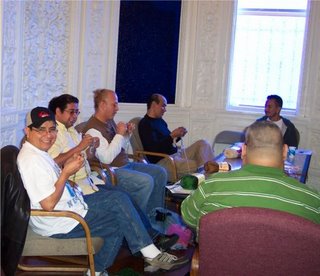 Oh, how did they do? I have a few issues with that pattern and I wanted to change some, as far as chains go, the number counts, etc. Now, I'm all nervous.

How exciting for you!

Just surfing in trying to get caught up on my blog reading.

I think that is wonderful about your classes!!!! I always admire someone who shares their knowledge with others, especially in the area of crochet.

Go for it. I saw in 2004 an article in Crochet about crochet and boys and therapy crochet. I live to crochet and I have been a volunteer of a mental health faciltiy. I now have worked almost 3 years with two different group homes with teenage boys. They crochet well. They sometimes buck at the projects I present, but they have a craft for themselves, and they are creative. They tend to figure out things, without taking the time to read patterns. I am glad that you appreciate boys and their abilities to do crochet. Good work, and continue stimulating their minds and provide them with challenges!