I have a confession to make, I am a puertorrican since birth. It is not a well known fact that puertorricans have been american citizens for about 100 years, the Jones-Shafroth Act gave the citizenship to puertorricans a long time ago. It is not a secret, but I am more than a puertorrican. In the year 1988 I became HIV +. Having the HIV Virus has been no picnic and, needless to say some people think I deserve it; while others pity me. Some show compassion, some people make the distinction between being HIV as opposed to having AIDS and being puertorrican. I like that, I want to be treated like an individual that has many layers. Being HIV positive is like being human, until now, there is nothing that I can do to change who I am, so I will have to live with who I am and do the best I can everyday for which I have a breath of air. Today I have AIDS.

Puertorrican Plus!!! Blogging my life away, i am getting out some of my secrets in hopes that someone will benefit from what I write. I was sexually abused by my father from the early age of 5 years of age. I remember the first time it happened like it was yesterday. Going forward in life at the age of about 8 my half brother started the same game of abuse; he is 5 years older than me. Did I tell anyone? You bet, I told my mother and she spanked me for fibbing, how dare I say that kind of thing about my brother. Well ladies and gents, my father sexually abused me until the age of 14. My brother sexually abused me until a week before he got married. I thanked the God I believed in. Now I had room to breathe for once in my life. From this moment on, it will be up to my mother to emotionally try to scar me for the rest of my life with fear of God and whatever she could find available. (Yes. I know she was doing the best she knew; that does not mean I had to like it.) Hopefully for me I created a thick skin, independant thinking and, by the age of 37 -- yes 37 years of age -- I realized that I have been operating from the modus operandi of a sexually-abused person. I secretly trusted no one ever since.

A child survivor of sexual abuse has a very difficult life, for it colors everything you do and everything you say until you start to mend the broken boy and become a mending man. Unfortunately, the job is never done; it is a continious work in progress. The book that helped me turn my life around was "Broken Boys Mending Men" by Stephen D. Grubman-Black. At the age of 37, I realized I was still the victim of that sexual abuse from so long ago. I was confused, lost and not knowing who I was, what was mine, or what was the result the abuse actually had on my life.
Why me? It became a constant question. Being an incest/sexual abuse survivor really SUCKS!!! Why did I feel this way? How can I fix this? Who can I trust? I realized I had to take care of my own problems. No one could help me that I trusted but me. Yet, why did it take so long in fixing myself? The only thing I had left was to help myself heal, to pull myself up, like many times before, and look at what was really mine, my accomplishements, my creativity, my loving nature. I stopped the cycle before it went further. No more abuse, the buck stops here. I am free.
I am proud of that. I am sharing this in hopes that someone can benefit from it and in hopes that any child molester will see how the truth eventually will come out. If I allow my anger to take over, I will publish the punishment that I think is fit for this kind of crime, but needless to say, anger does not possess that kind of hold in me any longer. Children are innocent and should be protected from child molesters no matter what gender, sexual orientation or habit they wear. Child molesters come from every walk of life, whether being a heterosexual, homosexual, male, female, priest, president, neighbor. I guess you get the idea.

Life was very different from that day on. I live life without regrets 100%; I have no fear of death. I believe in the law of physics: "For every Action there is a Reaction"

In classical physics, a reaction is defined by Newton's third law that can be formulated like

The idea that any given force has a pair or opposite force.

That is how this puertorrican plus has learned to view the Universe. When I was younger I had the arrogant concept of an Earth Centered "God" and, by that, I mean that, in our arrogance as humans, we believe that "God" has no other planet to worry about, his constant attention is devoted to Earth, the Blue Marble. I do not limit "God" to that frame, my "God" is incomprehensible by human standards, but it is there. It you say yes, as far as I know, there is no gender in heaven; the importance of gender is an evolutionary necessity for procreation . Anyway it is my personal belief.

Nature always brings peace to me. In nature, I find the hand of the unknown, the Universal Intelligence at work. Here is a picture of me many moons ago near my home town enjoying the
"El Yunque Rainforest" 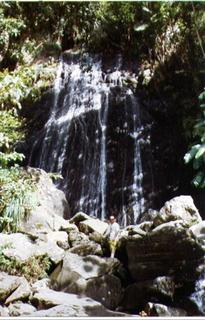 My father's ancestors came to Puerto Rico in the early 1500's to colonize the island and convert the natives into Christians. What a concept, but I will leave it at that. My mother's family can be traced to when Rodrigo de Nevares set foot on the shores of Arecibo sometime between 1700 and 1708, coming from Spain. I really enjoy this ancestry search, it can get very complicated if you allow it to overwhelm you.

San Juan the capital city of Puerto Rico is almost 500 years old, you can see in this picture taken from one of it's fortresses, the Old San Juan . 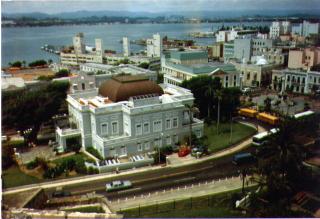 I grew up being proud of the city I was from. Lots of culture, art, and history, the main Cathedral in the middle of the island city.

Well this puertorrican plus is about to finish his post for today. It is important to say nobody can take away my innocence anymore, or rob me from being a loving human being. The God I believe in is bigger than any human word, book, or philosophy can describe . My God is the ruler of the whole Universe, not just a selected group of people, like the Sun my God shines on good and not so good people. From California I say to you Namaste.
- October 05, 2005

Thanks for sharing, Andy. I'm glad to you're the person you are. Maybe if there were more people like you in the world, it wouldn't be as bad a place at times. As I've mentioned to you before(I think), I love Latino men, i. e. Puerto Rican. You guys are just sexy as hell. Mostly in Columbia, we have people of Mexican origin. I've always wanted to try and have a relationship with a Latino, whether Puerto Rican, Mexican, etc., but no idea how to approach one without fear of mistaking the guy for being gay and causing a problem for myself. I hear that Latino's are notorious about being macho and possessive. May you continue to find peace and health in your life. Sorry for a long comment.

Calvin. You are quite correct in your assessment of Andres' integrity. There in fact ARE more people like him. I am one of them. I too have AIDS, and I too was molested. I, too, am also on the road to healing.

In fact, if you'll read the last part of Andre's post the other day, he he was discussing a friend who was on too many powerful HIV meds, he was talking about me. See http://crochetandy.blogspot.com/2005/10/legal-drugs-illegal-drugs.html

NOTE: I am not this friend who moved from San Fransisco. Read the last part of the post. That's me he is talking about.

All three of us are family, Maybe through our Blogs, we all can provide a support network for each other.

What a powerful post. There are so many thoughts going through my head that I need to organize them better before too much commenting...

Puerto Rico is such an amazing island. We took a 3week vacation there 3years ago. We traveled all over the island (and even got car sick exploring the central mountains). My favorite memories were of El Yunque.

Stay strong my friend and keep on blogging!!!!

I came to your blog thru crochet depot (Ro is the nickname there; I have two sets of blogs, one for my charity stuff under Ro and one that's personal under Rowan...hope that was more clarifying than confusing!)

One of my dearest friends was incested from the age of 5-16. I have seen her struggle with the way that it effected the formation of her very soul for more than 20 years. She is like a sister to me and it has grieved me to no end to see her suffer this pain.

You are such an amazing writer! You should really write a book if you haven't already. You are so expressive and paint such vivid images with your words. That's a gift.

I look forward to reading more of your blog. Sometime I'll tell you the story of the times my family visited PR back when I was little. Some interesting stories to tell...

big hugs and keep on writing, I am sure that you will help more people than you can imagine. Your courage and openness are a gift to the world, my dear.