Of Red string and some needles! 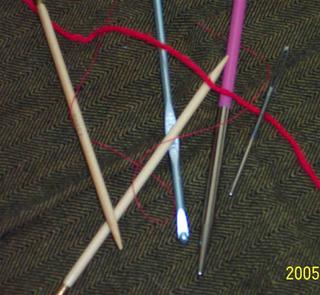 The wonders of human life and the power of simple things, a red string and some needles will enable you to do many things.

You can create garments, repair things or save someone's life, like the story below.

This by no means is an endorsement of any religion, so keep an open mind because the story is about faith, hope, trust, possiblities and beliefs.
Have you heard the story about Rahab her story shows you what something as simple as a red strings may save your life.

Rahab, (Heb. rachav; i.e., "broad," "large") is a prostitute who lived in the city of Jericho in the Promised Land, according to the book of Joshua in the Tanakh.

According to the book of Joshua (Joshua 2:1-7), when the Hebrews were encamped at Shittim, in the "Arabah" or Jordan valley opposite Jericho, ready to cross the river, Joshua, as a final preparation, sent out two spies to investigate the military strength of Jericho. The spies stayed in Rahab's house. When soldiers came to look for them, she hid them under bundles of flax and pretended that they were not there in order to prevent them from being captured.

"Rahab's being asked to bring out the spies to the soldiers (Joshua 2:3) sent for them, is in strict keeping with Eastern manners, which would not permit any man to enter a woman's house without her permission. The fact of her covering the spies with bundles of flax which lay on her house-roof (2:6) is an 'undesigned coincidence' which strictly corroborates the narrative. It was the time of the barley harvest, and flax and barley are ripe at the same time in the Jordan valley, so that the bundles of flax stalks might have been expected to be drying just then" (Geikie's Hours, etc., ii., 390).

When the city of Jericho fell (Joshua 6:17-25), Rahab and her whole family were preserved according to the promise of the spies, and were incorporated among the Jewish people. She afterwards became the wife of Salmon, a prince of the tribe of Judah (Ruth 4:21; 1 Chr. 2:11).

Rahab is also mentioned in the New Testament as one of the ancestors of Jesus (Matt. 1:5) and as an example of a person of faith (Hebrews 11:29-34).

Rahab identified her house with a scarlet robe. This was later adapted by prostitutes to become a red light that was placed at their windows to indicate the nature of their business to potential customers.

Rahab's story is possibly the inspiration for the euphemism "the world's oldest profession" for prostitution.

Again this is not about criticism or trying to put a religion on your agenda. This is about the posibilities of life from a peculiar point of view. I hope your week goes well, I will have more to say later this week. I am very glad to share and by this medium help others heal, and write or blog a personal story.