I have to write in order to get this off of my chest, because a friend of mine that moved from San Francisco, California, made a comment that he finally escaped from a "third world city," referencing San Francisco. He opined that it was full of "freaks." 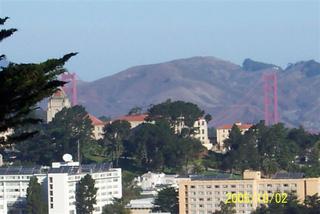 I myself am not a freak. It bothered me when he said that to me and a lot of other people in a mass email.

For instance, he considers shopping malls on every corner the sanctuary of modern life and, even though I like shopping malls, I must, nevertheless, disagree vehemently with his point of view; at the same time, I would not call shopping malls or corporations "evil."

One point he omitted on his critique -- on purpose, I believe -- was the fact that his biggest problem in San Francisco was his drug addiction problem. I think this was the biggest problem he had, for he simply couldn't earn enough money to support his drug addiction. He had lost more than one job because of this. He said he stopped doing drugs at one point. I replied, "I hope you did." It is a viscious circle, make more money to take drugs so you can make more money so you can take more drugs. I still love him as he is my best friend and will be there for him if he needs me. Moving to a new city with old problems is your biggest mistake; better leave the baggage in the baggage claim department, and just go with the shirt on your back, man. You will be tempted no matter where you go; just say 'no' to drugs! Otherwise, you will create suffering for you and your loved ones with nobody else to blame this time.

Well, it takes a lot of money to take drugs that are legal, so imagine how much more that illegal drugs cost. Not to mention that it in fact can cause felony charges and a prison term.

Now, let's discuss drugs that are legal. The other day a friend of mine was complaining about side effects from his AIDS Cocktail a.k.a. "Highly Active Anti Retroviral Therapy" ["HAART"]. He is taking medications without getting his Infectious Disease physicians to run two very important serolologic tests called genotype or phenotype, I forget which one it is called, but I related to him that the drugs he was taking are very strong drugs. At least in the San Francisco Area, drugs like Protease Inhibitors, like my friend is taking, are left as the measure of last resource, when AIDS patients run out of options for typically-prescibed AIDS medications called Nucleoside Analog Reverse Transcriptase Inhibitors (NARTIs) or (NRTIs) and Non-Nucleoside Reverse Transcriptase Inhibitors (NNRTIs), both types of which have a punch all of their own, but with a significantly decreased amount of side effects. Protease Inhibitors in fact do have their place in the treatment of HIV, but without knowing whether you need to take them or not is not a very sharp idea.

Lots of water, vitamins, and sunshine are not enough. HIV+ patients need to know if they can start with a softer HIV medication combination therapy.

Anyway. Thank you for stopping by. I will definitively be more outspoken about everyday life and things I see, hear, and taste. Have you ever had Blue Corn Chips with Hummus? Yum!

Andy? For what it is worth, your friends sounds as though he is running away from himself. As much as you cared about him, letting him go is the only practical choice.

God send us friends, sometimes, for only a season.

Yet, when God closes one door, he always opens another one for you, giving you the strength you need to press on for bigger and better thinks in life.